Energy reporting and benchmarking have started to take hold in several American cities to support strategic improvements to buildings while reducing their environmental footprint, and Canadian jurisdictions are also starting to embrace the concept. 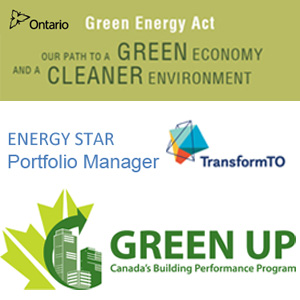 Canada Green Building Council (CaGBC) president and chief executive officer Thomas Mueller,  the principal of sustainability planning and research for the Integral Group Dave Ramslie and City of Toronto acting supervisor of policy for environment and energy Marco Iacampo discussed what’s been happening in the United States and Canada when it comes to benchmarking at the CaGBC’s “Building Lasting Change 2016” conference at Toronto’s Allstream Centre on June 8.

“Having a consistent system and consistent data across the country that policymakers can use is very important,” said Mueller, who talked about his organization’s GREEN UP national building performance program which building owners can participate in on a voluntary basis.  The program has given the CaGBC a “chance to see the median and where we had to go in terms of lowering energy performance in buildings.”

Vancouver-based Ramslie outlined what is being done with building energy reporting and benchmarking in New York City, Chicago, Philadelphia and Cambridge, Mass., and also outlined initiatives happening in Manitoba and British Columbia.

No jurisdictions in Canada are currently tracking buildings, according to Ramslie, and creating a database is a “very complicated, arduous and time-consuming” task. That’s only a start, however.

“Data on its own isn’t going to solve any of our problems,” said Ramslie. “It’s what we do with it and how we use it and get it out to the market that’s really going to make a difference.”

Iacampo explained Ontario’s proposed energy and water reporting and benchmarking regulation that’s expected to be introduced in July that was enabled by a recent amendment to Bill 135 under the Green Energy Act (2009).

“It’s an extension of a reporting requirement that applies to the broader public sector such as Ontario schools, municipal facilities and hospitals that were already reporting their energy and greenhouse gas emissions to the Ministry of Energy,” he said. “Building owners are required to report energy, water and greenhouse gas emissions data in addition to building characteristic information to the Ministry of Energy on an annual basis.

“Energy Star Portfolio Manager is the prescribed reporting tool in the regulation. The province is looking at a three-year phase-in period starting in July 2017, which will be the first reporting deadline for the largest commercial buildings that are greater than 250,000 square feet.”

Energy Star Portfolio Manager is an online tool developed by the Environmental Protection Agency (EPA) in the U.S. and used to measure and track energy and water consumption, as well as greenhouse gas emissions. It’s used in several U.S. jurisdictions covering almost 40 billion square feet of commercial real estate and is growing in popularity in Canada, where it’s now in about 12,000 buildings.

The EPA program was introduced for use by Canadian property owners, at no cost, by the Canadian Federal Government’s in February of 2016 through Natural Resources Canada.  There were already almost 12,000 Canadian buildings voluntarily enrolled in the program.   It was also the primary energy benchmarking tool used by the Race to Reduce.

Toronto has 3,500 buildings covering 550 million square feet of gross floor area scheduled to report under the pending regulation. The City’s TransformTO climate action plan has a goal of reducing greenhouse gas emissions by 80 per cent by 2050, and Iacampo said it’s about one-third of the way to that target so far. Buildings are the biggest contributor to greenhouse gas emissions in Toronto, accounting for almost half of them.

Iacampo concluded that a successful energy reporting and benchmarking policy should result in: better informed programs and policies; insight into achievable energy use intensity targets; the revamping of financing, incentive and rebate programs to better serve customer needs based on building performance; a basis for the layering of complementary building energy policies, such as audits, retro-commissioning, clean development mechanism plans and lighting upgrades; and opportunities for simplified, low-cost measurement and verification.

The benefits of greening existing buildings

A 2014 study conducted by the CaGBC and McGraw-Hill illustrated the business benefits of green retrofits and renovations to buildings. Operating costs decreased by eight per cent over one year and 11 per cent over five years, while the payback for investment was seven years and the value of green buildings was four per cent higher.

Vancouver-based Ramslie worked on a white paper titled “Energy Benchmarking, Reporting & Disclosure in Canada: a Guide to a Common Framework” that was released in April and set parameters for a consistent approach to energy benchmarking on a national scale. Its creation involved reaching out to utilities, local and provincial governments, industry organizations and academics as well as American cities where benchmarking was already taking place.

The framework components according to Ramslie should cover: building size and type; tools and timing; verification and support; transparency and visualization; further needs and opportunities; preparing the ground; building a database; encouraging compliance; getting the right data; managing data; ensuring data quality; and providing support.

Mueller stressed that achieving high performance in existing structures involves building operations, maintenance, occupant behaviour and system design, and that municipal, provincial and federal policymakers need to support energy benchmarking as a way to engage the existing building sector as a first step in reducing energy and carbon use.