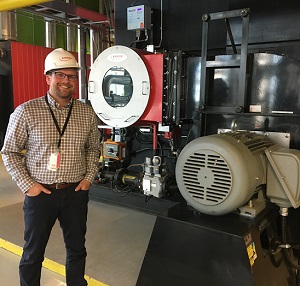 The District Energy Centre in Calgary, located in the East Village neighbourhood just outside of the downtown core, is a centralized generation facility which produces heat for distribution through underground pipes to buildings throughout the downtown and East Village.

The concept displaces individual building boilers and heating systems. Instead, the heat is transferred to those buildings through the pipes.

Jason Grabinsky, manager of business relationships for the district energy business with ENMAX, said Calgary’s District Energy Centre has been in operation since 2010 servicing the downtown area with thermal heating.

“It’s the centralized production of hot water.  . . . Making hot water from combusting natural gas is not a new concept, but in Calgary it was. We weren’t familiar with how to interface with buildings and how to interconnect with buildings to provide thermal heating,” said Grabinsky.

“Jurisdictions like Vancouver or Toronto . . . they have hundreds of buildings connected in each of those cities that are (receiving) heating and cooling from a central location.”

Since its inception, Calgary’s system has grown from one building connected to 17 today, with three more buildings coming online by the end of the year. There is about 5.5 kilometres of pipe in the ground.

The District Energy Centre generates 55 megawatts (187 million BTUs) of thermal energy, in the form of hot water, and distributes it through a network of insulated underground pipes. The heat is transferred from the thermal pipeline, via a plate heat exchanger, in the customer’s building. It is used for space heating and domestic hot water in commercial office towers, institutional buildings and residential condos.

“What we’re doing in detail design is we’re finding our cost estimate and we’re getting closer to what we would call an investment grade decision for the city and for the ENMAX board.”

He said Edmonton is ripe for district energy growth in a very short period of time — not only because of what ENMAX has learned in Calgary, but also because the Alberta capital has an underground walkway system in place.

Grabinsky said new buildings don’t need to allocate as much space for boilers if they are connected to the District Energy Centre. It also means lower capital costs for such equipment.

“In terms of ongoing operations, you don’t have to have a power engineer or a building operator on-site to be managing and maintaining the boilers in the property, and the condo or strata corp is not accruing for boiler replacement and maintenance annually,” he said. “In a new building, it has a significant impact to development costs for the developer and for the strata corp going forward.

“On existing buildings . . . it provides them the ability to not have to deploy capital, and if they are constrained from a capital perspective, to (not need to) replace boilers that are reaching end of life.

“Boilers don’t last forever. When they need to be replaced they cost in excess of $1 million, depending on the building, and so what you end up doing is you defer that cost or you avoid that capital expense.”

The potential for growth in Calgary

In Calgary, ENMAX expects to see more buildings coming online in the East Village. Future growth is expected in the neighbouring Victoria Park area near the Calgary Stampede, which is located just south of East Village. Eventually, the west end of downtown Calgary also has potential.

“With the real estate market the way it is, there isn’t a lot of buildings coming out of the ground, but there’s buildings that are aging in place and those property managers and building owners do not want to take on added capital expense to upgrade that infrastructure,” he said.

“So we see a great opportunity to retrofit existing buildings from a district energy connection so that they can defer that cost.”

Calgary’s District Energy Centre also has a combined heat and power unit which is now operating. It burns natural gas to generate electricity which ENMAX sells into the Alberta power pool, while the heat is harvested and put into the district energy system.

Thus, ENMAX gets two products from one fuel input; natural gas comes in and electricity and thermal energy are the outputs.

“We’re really excited about this because we’re able to generate electricity from this facility which we weren’t able to do in the past. And we’re able to do it with a carbon footprint that is much less intensive than traditional means of generation in the province,” said Grabinsky.

“We estimate that this combined heat and power unit here on-site will displace about 14,000 tonnes worth of emissions annually.”

That’s equivalent to removing about 3,000 vehicles from Alberta roadways, he said.

“It does have a significant carbon footprint on the city and on the province.”