It sounds like the stuff of science fiction. At General Fusion, a team of 70 scientists are working to commercialize a form of fusion energy. 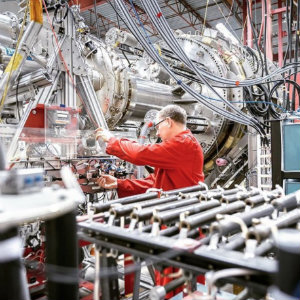 A scientist works on General Fusion’s prototype at its Burnaby, B.C. lab

Once operating, one of General Fusion’s modular 100 Mega Watt power plants could supply enough energy for 75,000 homes, and the power would be both cheap and safe, according to Tim Howard, a spokesperson with the Burnaby, British Columbia-based company.

“It’s referred to as the holy grail of clean energy,” Howard said. “It’s clean. It’s safe. It’s abundant. You can place it pretty much anywhere and draw energy on demand. As far as tackling climate change goes, it’s pretty hard to beat as a source of energy.”

Certainly General Fusion’s approach has caught the interest of both investors and clean technology advocates.

Formed in 2002, the company has raised over $100-million through a global syndicate of investors. The latter includes Jeff Bezos, the founder of Amazon.com; Cenovus Energy; and the Business Development Bank of Canada.

In late January, the company was one of 11 Canadian firms chosen for inclusion on the 2017 Global Cleantech 100. Produced by the CleanTech Group, the CleanTech 100 is a comprehensive list of private companies with the highest potential to make a significant market impact within a five to 10 year timeframe.

“General Fusion is honored to be chosen from a record number of nominees world-wide and included in the Cleantech 100 for the third year running,” said Interim CEO Bruce Colwill. “Once again, this recognizes the progress we are making in the development of the fastest, most practical path to commercially-viable fusion-powered clean energy.”

Indeed, the next five to 10 years is roughly when Howard anticipates a commercial version of General Fusion’s modular system. Currently, they’re working on subsystems of their fusion power plant as they continue to develop a prototype.

Fusion is an “inevitable technology”

If the pace sounds sluggish, then consider the technology has rapidly advanced since its introduction in the late 1950s and early ‘60s.

“We’re entering a really exciting time now with the ability to use advanced computer simulation, improvement in modern electronics and the like, to really push the field forward into territory where it hasn’t been before where we can make this a viable reality and a commercial source of power,” Howard said.

He called fusion an “inevitable technology.” Said Howard: “It’s what the world will be running on in a matter of years.

“I think it’s going to be a similar situation to what we saw with the maybe the Wright Brothers and the creation of an aerospace industry. That opened an entire eco-system of different companies that were assuming different technologies, different approaches to aircraft and I think it will be the same with fusion.”

“There’s a lot of enthusiasm for this technology in Canada

In fact, General Fusion is part of a global race to produce clean energy from fusion power. Public and private fusion projects are currently underway in more than three dozen countries. China alone plans to train 2,000 fusion scientists during this decade.

In that process, plasma is confined in a magnetic field for micro-seconds. It is then compressed through the use of a shock wave caused by hundreds of pistons firing simultaneously over and over again.

The compression heats the plasma to extreme temperatures, and the heat energy from fusion is used to produce steam, which drives electrical turbines, generating power for the grid.

“There’s been a lot of discussion, particularly since the US elections, about the direction that clean energy technology is going in,” Howard said. “I think it’s important to note that despite whatever happens in different parts of the world, there’s a lot of enthusiasm for this technology in Canada.

“I think there’s a lot of excitement about what’s going on in this field and a lot of potential as well. Regardless what the rest of the world is doing in clean energy technology, Canada is positioned to show leadership in this realm.”