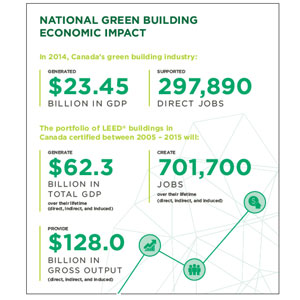 That is one of the findings in a recently issued study commissioned by the Canada Green Building Council (CaGBC) and conducted by The Delphi Group titled “Green Building in Canada: Assessing the Market Impacts & Opportunities” that shows just how much the sector contributes both economically and environmentally.

The Canadian green building industry was estimated to have employed nearly 300,000 direct full-time workers and generated approximately $23 billion in gross domestic product in 2014. The study also found there is strong demand for additional high-quality builders and designers who can deliver green buildings at a lowest cost.

CaGBC president and chief executive officer Thomas Mueller would like to see the industry double in size in the next decade.

“The potential for taking this to the next level and getting more into existing buildings and the multi-residential building sector — where it isn’t just the government embracing it in their own buildings — is huge,” he said.

“When I think about climate change policies and environmental policies, I think governments ought to be thinking about more investment in the industry, more investment in research and development, and financing incentive options for owners and developers to consider. The benefits in terms of jobs, materials and technology are huge. We’re only scratching the surface.”

While there are many small and mid-sized companies responsible for leading-edge designs at a provincial level, there are still few companies operating on a national or global scale. Mueller said many successful firms in the green building industry are so busy with local projects they don’t have the time or the workforce to pursue further expansion.

The diversity of policies across the country also means some provinces are adopting green building faster than others, which is another disincentive for firms to expand outside their local area.

Though research and development in the construction sector is the lowest of any sector in Canada, according to the report, the percentage of companies involved in green building is growing and more companies are raising the performance bar while making it their core business and earning more of their income from it.

The demand for expertise in the design, development, construction and operation of green buildings has led to the creation of new jobs in areas such as energy modelling, green roof design and construction, and sustainability consulting.

“We have a very competitive industry,” said Mueller. “Demand still outpaces capacity in some areas, but it’s growing and more and more people are getting into it.”

The Leadership in Energy and Environmental Design (LEED) rating system, recognized as the international mark of excellence for green building in 150 countries, has seen enormous uptake across the country since it was introduced in 2002. There were 31 LEED-certified buildings in Canada in 2005 and 2,576 in 2015.

In terms of overall economic impact, it’s estimated that LEED-certified projects to date will generate approximately $59.1 billion in direct dollar gross output and $25.4 billion in gross domestic product, and will create 330,000 direct jobs, over an assumed 33-year economic lifetime for these buildings.

When indirect and induced contributions are included, the overall economic impact from current LEED projects over their lifetimes will include $128 billion in gross output and $62.3 billion in total gross domestic product and create about 702,000 jobs.

However, there’s a wide gap between those two asset classes and the LEED penetration rate for residential buildings. Mueller said that gap is disappointing but not surprising.

The residential building sector is more locally based and fragmented than the commercial and institutional sectors, and Mueller said residential developers bear the costs for implementing improved energy efficiency but don’t reap the benefits.

“This is an area that requires a third party such as a utility to finance energy improvements and then recoup their costs from the energy savings of the building,” said Mueller, who also suggested government incentives and better regulations and energy codes could play a role in giving the green residential sector a boost.

The report concludes that Canada’s green building industry has grown quickly and accomplished a great deal in a short period of time despite a range of barriers and challenges. However, in order to accelerate the market’s transition, a national, cross-sector strategy led by industry and supported by all levels of government is needed.

Increased investment in research, development and deployment, as well as education and training, could help maximize the economic and employment opportunities while aiding the environmental, health and societal contributions provided by the green building sector.

Building on a good reputation

“What has happened with green building in Canada has mainly happened voluntarily and resulted from contractors, designers, developers and owners saying they have to do it because it’s good and it’s working,” said Mueller.

“We can get very high performance with a really acceptable return on investment. What’s missing is the capacity of really good designers and builders and, with existing buildings, retro-fitters and energy managers.”