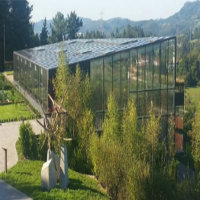 That same revolutionary glass that has won a number of awards and wide-spread architectural recognition will soon find its way into Canadian buildings for the first time, thanks to a new distribution deal with Toronto’s Belnor Engineering.

Pramod Verma, the president and CEO of Belnor, said they are tendering the first project, a pilot project with the North York Civic Centre.

The centre is replacing glass in the building and decided to use Onyx Solar as a test case, where Verma said the centre actually plans to have a panel on the wall, which will show how much power the solar panels produce.

“It’s to show people the technology.”

The panels have been used in architectural icons globally

Verma said the panels have also generated a lot of interest with the Canadian architectural community. The glass comes in different thicknesses and opacity.

“Because you can get different colours and shapes, it gives the architect a lot of leeway in what they’d like to do with it.”

Verma said Belnor is working with a lot of architects currently and that is the company’s main focus at the moment. He said they have received numerous questions on how the panels work on buildings.

“We’ve been invited to a lot of meetings and we’ve done seminars and lunch-and-learns,” Verma said.

Some of the panels benefits are the ability to generate energy, but they are also able to filter out harmful ultraviolet and infrared rays, and feature strong acoustic insulating properties.

Many of the international projects using Onyx Solar’s glass are far from modest. The Norvatis Pharmaceutical Company in New Jersey, for instance, installed a skylight with 820 modules of photovoltaic glass and which enables the building to generate over 270,000 kilowatts annually, equivalent to lighting over 600 homes per year.

The Azurmendi Restaurant in Spain incorporates the glass in its curtain walls and skylights and used it to not only help obtain LEED Gold certification, but also the 2014 title of Most Sustainable Restaurant in the World.

The restaurant’s glass generates approximately 16,500 kilowatts annually, while preventing the release of 11 tons of CO2 into the atmosphere.

Yet another project using the glass is the American Airlines Stadium in Miami, Florida. It has a number of circular skylights featuring the glass and which contributed to the stadium being the first sports and entertainment centre to obtain LEED Gold recertification.

The company has even invented a walkable floor solar technology, which has been used in the new Apple Store in San Francisco, as well as at George Washington University. The university installed the world’s first solar walkway and side walk on the Virginia Science & Technology Campus, measuring 100-square feet.

Altogether, since its founding in 2009, Onyx glass has been used in over 70 projects in more than 25 countries.

In July 2016, consulting firm Frost & Sullivan awarded Onyx its award for technology leadership, citing its “innovation excellence [that] has enabled it to continuously roll out new solutions, endowing it with substantial commercialization success and high customer acquisition rates.”

“The only building material that pays for itself”

The glass has a life-span of 30 years, equivalent to that of roofs made from conventional asphalt shingles, Frost & Sullivan research analyst Hafiz Amin said.

Every installation provides building owners with LEED points toward the energy and atmosphere, and innovation and design processes. At the same time its BIPVs add only two to five per cent to the overall construction costs of a conventional building.

Verma described the panels as the “only building material that pays for itself. It may be a bit of a premium in the initial stages, but it’s one that by power generation and savings in energy does pay for itself very quickly.”

How quickly building owners can recover the cost from installing the panels depends on such variables as whether they decide to use double or triple glazed windows.