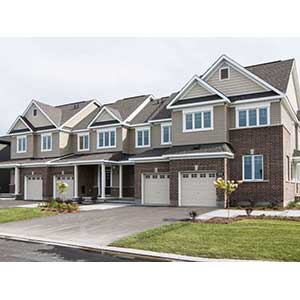 The net-zero technology adds some $45,000 to $50,000 to the cost of the homes, but Minto’s manager of sustainable development Derek Hickson said they’ve crunched the numbers and it’s still affordable.

“The math we’ve run shows that if you were to put that onto your mortgage, you’ll save more in utility fees than you would pay in extra mortgage fees.”

Inside, the houses have had natural gas replaced with a cold climate heat source heat pump as well as a heat pump hot water tank.

Solar panels on the rear of the homes are capable of suppling 8.5 to 9.5 kilowatts a year, enough, Hickson said, to offset all of the places’ energy consumption for the year.

The townhouses follow Minto’s launch last year of a single-family net-zero home called the Killarney, also located in Arcadia. That house starts at a price of $495,000.

Despite its most recent foray into net-zero building, Hickson says Minto isn’t ready to devote itself 100 per cent to that style of construction yet.

“My guess is we won’t go guns blazing with everything net zero. It will be more of an end goal.”

For now they’re offering the Killarney model as an upgrade, and the plan is to sell the four townhouses, monitor the customer feedback, and revise them again before Minto makes them into a product line.

Minto is one of the earliest Canadian builders to look at net-zero, opening its first net-zero home in 2008 in Ottawa. That home was a winning entry in the Canadian Housing and Mortgage Corporation’s EQuilibrium Sustainable Housing Demonstration Initiative.

Hickson said the intent of the competition was to bring a net-zero house to market and Minto accomplished that goal. It was also a learning experience for the company. At that time, producing a net-zero house was both prohibitively expensive and time-consuming.

None of the off-the-shelf systems that are available today were around. The company engineered its own solar water heating system. “It was quite complicated,” Hickson said.

Beyond that, Hickson points out the company has always been interested in reducing its environmental impact. “We think it goes hand-in-hand with what we’re trying to deliver to our customers. Net-zero seems to be where the industry is going and we want to stay ahead of our competition with regard to that.”

People are looking for simplicity in net-zero designs

In terms of sustainability, Minto has won a number of awards, including being named Ontario Green Builder of the Year at the 2015 EnerQuality Awards Gala.

In 2016, the group’s Minto Place complex in Ottawa achieved LEED Silver for existing buildings. Built in 1988, the mixed-used complex includes three commercial and one residential tower as well as a retail podium. It was the first complex of its kind to achieve the certification in Canada.

Minto has run focus groups on the benefits of net-zero with consumers. They found that people are attracted to the comforts it offers, such as having uniform temperatures on every floor. But Hickson notes that having an “over-engineered” solution can scare off consumers.

Hickson said everything in the townhouse are as simple or simpler to operate as in a traditional home. “That has a lot of appeal to people as well, this idea that there isn’t a lot of maintenance required,” he said.

“I think the interesting part of this project will be looking at who’s buying them,” he said. What resonates with the customers will show Minto what the next steps are for them to take.