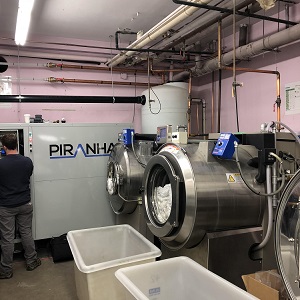 SHARC’s Piranha system is the first of its kind in the heating, ventilation and air conditioning market. Its self-contained heat pump uses a proprietary direct expansion heat exchanger to extract thermal energy.

At Lake Louise Inn, the Piranha system collects hot water from washing machines. Rather than draining into a sewer as is the currently accepted wastewater practice, the heat energy in the water is recovered. The water acts as a source for the heat pump, which heats incoming cold water for future loads.

It took two days of plumbing and electrical work to install the Piranha system, at a cost of about $60,000, at Lake Louise Inn. It’s expected to reduce carbon dioxide emissions by more than 80 tonnes annually, which is the equivalent of taking 17 cars off the road. It should also reduce the energy use for the inn’s three large washing machines by 85 per cent.

Since Lake Louise Inn runs on propane, Mueller said it can expect to save about $50,000 annually on fuel costs. The savings would be approximately $20,000 a year if the inn was fuelled by natural gas. Either way, it’s a very good return on investment.

“One of the things we’re most proud of is that we can put our system in and have a quick payback without needing the government to support it,” said Mueller.

All Atlific hotels are certified in the Green Key Eco-Rating Program, which recognizes hotels, motels and resorts committed to improving their environmental and fiscal performance. Atlific has put a concerted effort into enhancing its sustainability initiatives, particularly in the areas of conserving energy and reducing waste.

“We at Atlific are excited about this initiative and in time will be actively looking for other suitable candidates for this system,” said Atlific operations vice-president Gordon Johnson. “I was there last week with Nuwan Eparatchy, Lake Louise Inn’s GM, and I can’t wait to see the results over the coming months.”

The Piranha system can be implemented in any building which uses plenty of hot water. It has been installed in Canada, Australia, the United Kingdom and the United States and received the 2016 Sustainable Product of the Year Award from the American Society of Heating, Refrigerating and Air-Conditioning Engineers.

“That was really amazing because we were up against multi-national, multi-billion-dollar companies and their products,” said Mueller. “We were the smallest company in the race and we won, which was really gratifying.”

SHARC is based in Port Coquitlam, B.C. The province’s Energy Step Code, a voluntary standard enacted last year which encourages more energy-efficient buildings to go beyond the requirements of the base building code, has contributed to making B.C. the company’s key Canadian market for now.

“It requires developers to reduce their carbon emissions by 70 per cent for buildings,” said Mueller, who said most structures being built in the province will include SHARC systems. “Everybody wants to reduce carbon, and we do it without a financial penalty because we save people money and reduce carbon.”

Heating and cooling with sewage

Mueller said SHARC recently completed a project in Washington, D.C., at DC Water’s new US$60-million, 150,000-square-foot headquarters, which is entirely heated and cooled using sewage. Mueller said DC Water is saving 35 per cent on cooling costs and 85 per cent on heating costs, as well as almost 19 million gallons of water which would have been used to feed air conditioning cooling towers.

“When people think of recycling, they think of bottles and cans,” said Mueller. “We recycle heat every day.”

SHARC has grown from having 12 employees last year to 35 today, and Mueller said it’s still hiring and growing. It has U.K. offices in Glasgow, Scotland and Newark, England and is looking to open branches in Australia, Germany and South Korea.