A solar power company that has successfully installed more than 2,500 residential solar systems in southern California is now going after the Vancouver market. 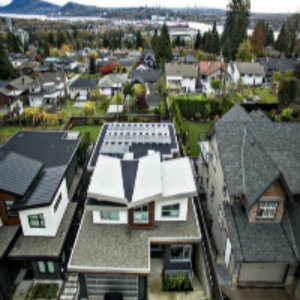 A Vancouver house equipped with a Solar Alliance solar system

Headquartered in San Diego, but with a Vancouver based chairman and CEO, Solar Alliance Energy Inc. (SAN-X) is targeting the luxury home market in Canada’s west coast city.

Solar Alliance is partnering with Vancouver’s West Peak Developments, a custom developer of luxury homes that come with the latest in green technologies.

“We’re going to people who have Teslas, people who have very high-value homes and massive square footage and we’re marketing to the luxury end of the market,” said Jason Bak, Solar Alliance’s CEO.

Bak noted that while the Vancouver market could be identified as luxury homes or people with a lot of home equity, the fact that many of their customers tend to be electric car owners is an equally important factor.

“People who are taking up electric car adaption fast than others, people who care about the green attributes more than the financial savings are the early adopters or at the front end of any given market,” Bak said. “And that’s the type of person that’s happy with the 15-year pay-back on a solar system.”

The system Solar Alliance is marketing in Vancouver costs $25,000 and provides roughly six kilowatts of power, and should provide power for close to 30 years. The price includes installation.

That differs from southern California, where in San Diego the company has an ad running in Spanish that says if a home owner is two to three months behind on their utility bill, Solar Alliance will pay up to the present day and put a solar system in the home that will save 30 per cent on the electricity bill.

“Vancouver is different because we have such a high amount of wealth in this city and equity that’s tied up in peoples’ homes that the cost of a $25,000 system is somewhat material, but not hugely material relative to the value of the home,” Bak said.

According to Bak, the main thing Solar Alliance sees in the market, and which he said utility companies often miss, is what the consumers want. “Everybody – politicians and utilities – are chasing the lowest cost per kilowatt hours. To a certain extent, the majority of people want cheap power.

“But there’s also people that want other things: Control, resiliency. There’s other aspects of solar power that don’t function down to a simple cost per kilowatt hour.”

Bak said many people don’t believe solar makes sense in Vancouver because of the city’s rainy climate, but Solar Alliance uses a net metering model, gathering solar energy when the sun shines, and allowing the excess to be sold back into the grid.

“”Installing solar on your home is the first step towards taking control of your power, reducing the demand for fossil fuels and ensuring a resilient supply of electricity,” Bak said.

Originally the company was named Finavera Wind Energy and developed roughly $1 billion worth of wind farms in Canada and Ireland. But the company sold off those assets and in mid-2015 acquired southern California’s Solar Alliance of America.

Bak said they “decided to focus our business on solar as the change and disruption to the market is going to present a much greater opportunity for our shareholders.”

Working at utility scale was proving tough to manage and Bak calls it an “inefficient model,” noting that their wind farm in Northern B.C. had thousands of kilometres of power line to move the electricity to other parts of the province.

In the meantime, he said solar’s costs are falling faster than that of any other renewable. “Wind is not falling at the same rate as solar. Solar is going to beat wind with distributed power.”

Part of the reason is people can see what they’re getting with residential solar as compared to a wind farm, Bak said. Customers can see the solar array on their roof, and see on an app how much power they’ve generated.

“As a result it mobilizes private capital as opposed to government capital,” Bak said. “if the consumer decides they want something, they want something – and they get it generally. They vote with their dollars, which is more powerful than many government infrastructure spending programs across Canada.”

Solar Alliance wants to be first to market

Not content with its expansion in Vancouver, Solar Alliance is already eyeing Ontario and Quebec as well. Bak said in those provinces it’s not so much about the fundamental electricity rate and more about people wanting to cut the cord and take control of their power.

“That’s how I think solar will expand quicker in areas outside of Ontario by focusing on those early adapters, the communities that are serviced by diesel, the off grid markets which you are seeing in Northern Ontario and certainly in B.C. and Quebec.

“So we do think there is a market and we want to be one of the first ones to be present in the market with market share.”