Eric Bjornson wants to be the IKEA of home construction. The Winnipeg-based, environmentally-friendly homebuilder has garnered a reputation in the province for designing and constructing custom, net-zero energy, single-detached homes. 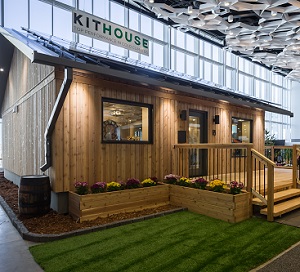 The KITHOUSE is being marketed as a prefabricated, net-zero residence. (Lindsay Reid CLICK Studio)

Now he has a big — and ambitious — idea that comes in a relatively small package. If it’s successful, he hopes to change how the industry builds.

“We think we could be one of the biggest builders in the country one day, all shipping out of Winnipeg,” says the president of KITHOUSE, which designs and builds prefabricated homes.

It’s an outsized goal for the boutique builder, which came up with the concept of building prefabricated, shippable homes after constructing custom-built, energy-efficient homes for more than a decade. The problem, he found, was these homes came with a premium price tag, putting them out of reach for many Canadians.

So his company developed a prefabricated, highly energy-efficient home specifically designed to be affordable. Equally important is that it can be easily shipped to, and built in, remote areas where skilled labour, materials, equipment and infrastructure are in short supply.

Could fill a void in remote, northern areas

Indeed federal government data reveals a dire need for this kind of housing solution. A shortage exists for adequate housing in northern, remote parts of the country. Demand is high particularly in Indigenous communities where existing residences are often old, energy inefficient, in need of repair, overcrowded and hazardous to health.

“The kit concept puts all the material in one shipment and reduces the amount of skill you need to build a home, so that’s why we think it will have the biggest advantage where it’s tough to build,” he says.

No cutting or measuring is required. Workers largely only need to assemble the pieces, with all the necessary components included in the container.

“It’s like when you buy something from IKEA,” he says. “You can build a table in an hour whereas if you had a pile of lumber and a planer, you’d be there for a week.”

One KITHOUSE can be built in 30 days, he adds, as opposed to six months for conventional construction, which saves on labour costs.

Still the concept is not new.

Kit houses popular 50-plus years ago

Kit houses were popular in the first half of the 20th century. At the time, kit houses were ideal for building in new communities when materials were scarce and costly.

Off-site construction manufacturers are growing in prominence too, including Calgary firm DIRTT Environmental Solutions which pre-builds walls for office, retail and residential. Traded on the Toronto Stock Exchange, it’s valued at more than $500 million with clients around the globe.

Yet KITHOUSE aims to put a new spin on a prefabricated building by putting the components for an entire home in one transportable box. Its first market offering, the KITHOUSE Premiere, is a two-bedroom, 800-square-foot-home designed to be used in cottage country and remote communities.

Using a photo-voltaic solar array, foam-free R54 insulation, and passive solar design (walls that collect, store, reflect and distribute solar energy), the KITHOUSE is built to be as energy efficient as possible, he adds.

“We’ve modeled it in simulations across the country,” he says, adding the company hired a Vancouver-based consulting firm to independently measure the Premiere’s efficiency.

“While it may need modifications to be net-zero in certain areas, for 90 per cent of where Canada’s population lives, it would be net-zero.”

So far, only one house is under construction near Riding Mountain National Park. Once built it’s expected to be hooked up to the grid, allowing it to distribute excess solar power while drawing electricity from the grid when sunlight is unavailable.

“If you add up all the give and take, you would expect to be zero or slightly less over the course of the year,” Bjornson says about its net-zero efficiency.

According to the province’s largest utility provider, Manitoba Hydro, the KITHOUSE has potential to fill a need for energy-efficient housing in northern parts of Manitoba.

“Homes and buildings in remote communities often have higher energy bills as they do not have access to natural gas to heat their homes,” says Manitoba Hydro spokesperson Bruce Owen.

Owen notes based “on estimated performance, KITHOUSE homes can apply for incentives and certification under” its New Homes Program, launched in 2016 to support energy-efficient new builds.

Because KITHOUSE homes can provide power to its electrical grid, residents could earn energy bill credits during the summer, reducing their power bill costs in the winter, Owen adds.

“They have a fairly large request for proposal for building net-zero multi-family dwellings.”

Industry “not ready” for net-zero

Bjornson adds starting in 2030 the new national building code calls for new construction to be net-zero.

“And the concern is that the industry is not ready,” he says.

The big stumbling block is cost, rather than technology. But Bjornson says his company’s proposal—a low-rise, multi-family apartment—uses the same pre-fabricated principles as the KITHOUSE Premiere offering a low-cost method to building net-zero.

“The whole concept is that it’s designed for Canada’s harsh climate, but it really has no bounds geographically,” Bjornson says.

“So it could become the go-to method for building in the north or all parts of Canada, and for that matter the rest of the world.”

Joel is a Winnipeg writer covering a wide variety of topics from personal finance and real estate to health and fitness. His work has appeared in many major Canadian daily…

Joel is a Winnipeg writer covering a wide variety of topics from personal finance and real estate to health and fitness. His work has appeared in many major Canadian daily…