Stellantis has announced $3.6-billion in investments at auto facilities in Windsor and Brampton t... 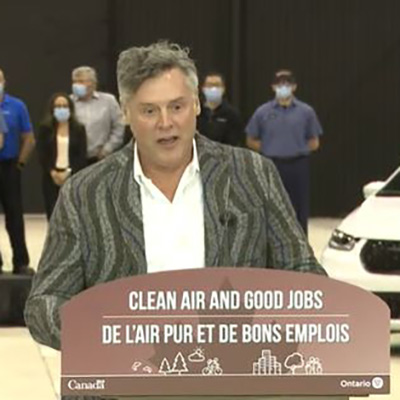 Stellantis has announced $3.6-billion in investments at auto facilities in Windsor and Brampton to facilitate the production of electric vehicles (EVs).

The announcement Monday at Stellantis’ (STLA-N) Automotive Research and Development Centre (ARDC) in Windsor follows on the heels of another massive announcement in April that it will partner to construct a $5-billion battery manufacturing plant, also in Windsor.

Stellantis’ Windsor assembly plant, which currently manufactures the Chrysler Pacifica, Voyager and Grand Caravan minivans, will be retooled to be capable of producing EVs.

Job creation numbers will be determined once the Windsor plant’s retooling is complete. Construction is to begin in 2023.

Stellantis’ Brampton facility, where it currently manufactures the Chrysler 300, Dodge Charger and Dodge Challenger, will see improvements beginning in 2024, with production resuming in 2025. There are also plans to build at least one wholly new electric model at the Brampton facility.

Meanwhile, its Etobicoke casting plant will get $9.1 million in equipment upgrades.

Both the Brampton and Windsor plants will return to a three-shift operation with these investments. Product allocation will be announced at a later date.

As it looks to shift toward electric and hybrid vehicles, Stellantis — owner of 16 automotive brands including Chrysler, Fiat, Dodge and Jeep — is aiming for net-zero carbon emissions by 2038, with a 50-per-cent reduction by 2030.

Stewart said during the announcement this investment is part of the company’s plan to offer more than 25 battery-electric vehicles in the North American market. This includes “more than 53 per cent of our sales targeted for EVs by 2030.”

By 2035 Canada intends to ban the sale of new internal-combustion engines in passenger vehicles.

This latest announcement is part of the company’s long-term strategy to invest $45 billion in electrification and software globally through 2025. With the Windsor retooling, current Canadian investments total $8.6 billion.

“We have reshaped the future of the auto sector in Canada,” Champagne said.

The facility will cover 4.5 million square feet, and represents the largest investment in the history of the Canadian auto industry. It will have an annual production capacity in excess of 45 gigawatt hours, and also create 2,500 new jobs in the province.

All three levels of government are also involved in supporting this initiative.

“We’re investing in every part of the auto supply chain,” said Ford at Monday’s announcement. “The cars of the future will be built in Ontario from start to finish.”

As part of this announcement, Stellantis will also create two Electric Vehicle Centres of Competency at the ARDC, focusing on EV production and battery technology.

The 10,000-square-foot addition, which will become the automakers’ first battery lab in North America, will add 650 engineering jobs upon completion by the end of 2023.

R&D at the facility will focus on EV technology, and Stellantis, whose Canadian operations are run by FCA Canada, will invest $364 million for its development. The Ontario government is contributing $94 million to these centres.

The centres are also expected to provide opportunities for students in university and college, as well as for startups which want to take part in EV production.

Other automakers, including Ford and GM, have also laid out multi-billion-dollar partnerships with federal and provincial governments to expedite the transition to electric and hybrid vehicles at their Ontario operations.

Recently, GM announced a $2-billion plan to convert its Ingersoll plant to produce electric vans and expand production of the gas-powered Chevrolet Silverado at its Oshawa plant.

“We’re building a world-class Canadian auto industry, an innovative economy and a clean, strong future for everyone. This is what a healthy environment and a healthy economy looks like,” Trudeau said in a release.

TTC contracts New Flyer for up to 565 hybrid-electric buses

Nicholas Sokic Transportation BluWave Ontario Apr. 25 2022
Nicholas Sokic Business reporter
Nicholas Sokic is a freelance, Toronto-based journalist. He has covered a number of sectors, including business, finance, crypto, health, cannabis and culture. He graduated from Western University's Master of Media in Journalism and Communications program in 2019.