The City of Airdrie just outside Calgary is now home to Canada’s largest municipal rooftop solar... 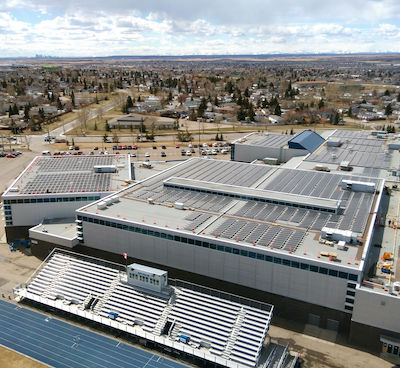 The City of Airdrie just outside Calgary is now home to Canada’s largest municipal rooftop solar installation and Mayor Peter Brown is enjoying the bragging rights, even though he knows it will likely be short-lived.

“I suspect there will be lots of people looking to take us down here pretty quick,” said Brown in an interview with SustainableBiz.

A 1.55-megawatt (MW) system consisting of 3,800 panels and supporting infrastructure is now providing renewable energy to Airdrie’s Genesis Place Recreation Centre. It will meet up to 30 per cent of the centre’s electricity needs and reduce costs by up to $80,000 annually, based on 2017 consumption.

The $2.8-million solar project is a collaboration between the City of Airdrie and ENMAX Power Corp., a Calgary-based company.

“It’s really an awesome initiative,” said Brown, adding “this isn’t going to be our (last) foray into greener pastures.”

Located north of Calgary, Airdrie is the fifth-largest city in Alberta with a population of more than 70,000.

The solar array will reduce greenhouse gas emissions by more than 1,000 tonnes per year — the equivalent of taking 275 cars off the road. It’s also expected to export approximately 140 kilowatts per hour back to the city grid during peak summer months.

The project was 82 per cent funded by grants, including the Municipal Climate Change Action Centre and the federal gas tax fund.

Brown said feedback has been positive, especially when he talks about the project with younger generations.

“I know every kid that I’ve spoken to under the age of 16, 17, especially in the primary grades, they’re absolutely thrilled — their whole world is about a greener future — so that’s really exciting to see from their perspective, that we’re actually moving in this direction.”

In oil-heavy Alberta, “I had a couple of comments about the cost but honestly, when you think about it, our investment will be paid back over between eight to 10 years, and over the life of the project, 30 to 40 years,” Brown said. “We’re going to be generating revenue for over 20 years that wasn’t there before . . . and it’s free energy.”

Every panel on the roof is weighted down so they don’t penetrate the surface of the roof.

“That was one of my concerns, was (with) bolts and screws and everything else now you’ve got leaking into the facility and degradation and things like that,” he said. “But that’s not how these are set up . . . they’re weighted down with bricks.”

As for the skeptics: “They’ve come around when they find out that the investment — these are grants that were through the Government of Canada and the Government of Alberta — if Airdrie didn’t look at taking them, then someone else was going to, so why wouldn’t we do it? It makes no sense not to . . . and those panels pick up a lot of energy through the clouds, which I didn’t realize.”

Snow load isn’t something to worry about, he said, since it melts away.

The installation bumps Leduc, Alta. out of the top spot. “They installed that a few years ago,” said Brown, adding “theirs are a little bit smaller modules.”

A second phase, due to be completed in September, will include 240 modules on a double-wing carport in the parking lot of Genesis Place.

“You see them a lot in the sunshine states,” such as California, said Brown, where electric-powered vehicles are popular. “We won’t have the plug-ins immediately … Tesla and Toyota and all the manufacturers seem to have different attachments for the vehicles, so we don’t want to put one in and have the wrong one.”

Testing at that site will allow city staff to gauge “how many electric vehicles are coming and going,” said Brown. “It would be a good [pit] stop to charge —if you could— have something to eat, and move on to your next destination.”

Brown said he’s seen “a handful” of Tesla electric vehicles in town. Hybrids are a bit more common, “but I would say they’re not the prevalent vehicle — not yet.”

As for other projects, a new library is also being built in Airdrie.

“I can’t imagine that [sustainability] won’t be a consideration for this new public facility,” said Brown. “We’ve got police stations, and you know, we’ve put a lot of money into backup generators and things of that nature, and if you can already store your energy . . . there’s lots of economic reasons to do it.”

Buildings aren’t the only places where change is being implemented. Windmill light standards are in place at Chinook Winds Regional Park, said Brown.

“They light up the park at night, but it’s 100 per cent wind and solar,” he said, adding that project was primarily funded by the federal government.

It all ties into the AirdrieONE Sustainability plan, created in 2012.

Brown lauded the efforts of ENMAX, saying he “highly recommends” the company for such projects.

“The environmental leadership that Airdrie is demonstrating today will have significant benefits for decades to come,” said ENMAX VP of sales Erwin Kantwerg in a media release.

ENMAX has been providing renewable energy to homes, businesses and municipalities since 2009 and says it has installed 50 per cent of the solar capacity in Alberta.