Collaboration is key for an innovative building energy-efficiency standard that’s made British Co... 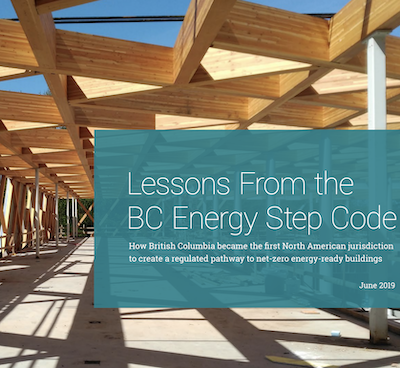 Cover of the new report, Lessons From The B.C. Energy Step Code.

A new report, Lessons From the B.C. Energy Step Code, explains how the province developed a building code designed to steadily improve energy efficiency and transform the market toward the ultimate goal of net-zero energy-ready performance.

The B.C. Energy Step Code is part of the B.C. Building Code. Local governments can use it to require or incentivize builders to deliver a higher level of energy efficiency performance in new construction projects.

Municipalities choose which steps they’ll require, and on what schedule in advance of a step being adopted as the new base code.

At least 28 of the province’s 162 local governments have referenced the standard in building bylaws, according to the report. Locations include heavily populated areas: on Vancouver Island; in and around the Lower Mainland; up the Sea to Sky Corridor from Vancouver toward Whistler; across the Southern Interior region.

These communities collectively host 70 per cent of new residential construction in the province.

But the province has established “a long-term performance goal, and specific tiers that the construction industry will be required to meet along the way. It has given builders a clear picture of that goal, and clarified expectations, timelines, and costs.”

So much so that eventually, “very high-performance homes, offices, stores and other buildings will not be the ‘boutique’ products they are in B.C. today. They’ll be the norm,” the report reads.

“The B.C. Building Code now allows builders to voluntarily meet any step of the B.C. Energy Step Code and receive a permit, rather than follow the base code’s prescriptive approach,” the report reads.

Outcomes are emphasized in the B.C. Energy Step Code, as opposed to processes. Builders are given requirements across a range of metrics and left to work with an energy advisor to determine the most cost-effective way to meet a long-term goal.

Starting in 2022, the base code will begin ‘catching up’ to the B.C. Energy Step Code. “The entire province will reach the top of the proverbial staircase by 2032, when net-zero energy-ready construction will be the law of the land,” reads the report.

B.C.’s 162 local governments represent a wide range of experience and capacity. The 15 large and medium-sized cities have more capacity and tools available to them than the remaining 147 municipalities, the report reads. Vancouver, the largest city in the province, has its own building code “and has long championed high-performance buildings.”

The rest of Canada can learn a lot from B.C. The Government of Canada established a range of built environment objectives in the Pan Canadian Framework on Clean Growth and Climate Change. A national net-zero energy-ready model building code is currently in development.

* Taken together, these associations reach more than 55,000 members across the province.

* The Province of British Columbia enacted the B.C. Energy Step Code in regulation on April 6, 2017 and it entered into legal force on December 15, 2017.