A new Vancouver office building is the first in Canada to feature a full smart windows system to... 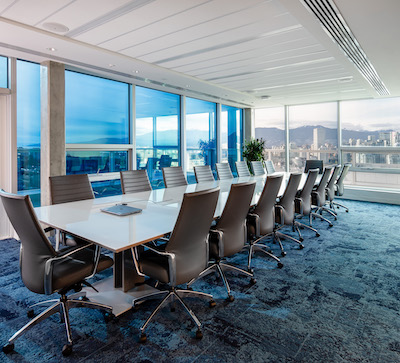 With the touch of a tablet, individual windows can be darkened using the View Dynamic Glass smart windows system. (Courtesy Bluesky / View Dynamic)

A new Vancouver office building is the first in Canada to feature a full smart windows system to reduce glare and external heat without blinds, the developers say.

Developed by a View, a Silicon Valley company, the system controls heat from the sun and glare, reducing overall energy consumption and costs.

BlueSky Properties initially considered the windows for residential projects but opted to test the View technology at 988 Broadway so it can monitor the system as a long-term owner, said Dale Bosa, BlueSky’s CEO.

The smart window system controls the amount of light entering the building by automatically tinting to block glare using nanotechnology. It can also be manually controlled down to the level of individual window panes via a tablet or other electronic device.

The system can reduce incoming visible sunlight by up to 99.5 per cent.

“There is a premium to (the cost) but . . . we should be getting about a 20-per-cent savings on the operation of the building,” Bosa told RENX. “There is a lot more usable space in the floor-plate as well. You can put the desks right up next to the glass now and you don’t have to have shadings or blinds.”

The building, like many of Vancouver’s office towers, has views of the nearby water and mountains. This system allows occupiers unimpeded views without having to deal with glare or heat from sunlight, Bosa said.

Industrial Alliance (iA) Financial Group is an ownership partner in the project and leases all nine floors of the office component for its western Canadian headquarters. Additional commercial tenants, including Johnny Rockets burgers and DALINA cafe, will reside on the street level at 988 West Broadway, which was designed by Chris Dikeakos Architects with interior designs by BYU and Square One Interior Design.

Alnoor Jiwani, senior vice-president with iA, said it is the fourth largest insurance company in Canada. The company had been located in two separate buildings at nearby Broadway and Arbutus streets for the last 25 years.

“We have about 425 people right now in the building, but we could probably handle about 500 because we’ve got one floor that is open,” he said. 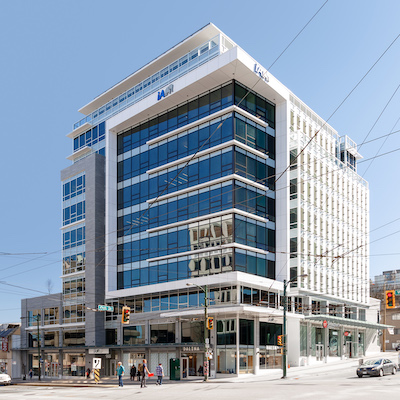 iA says so far, so good

The new system has worked well since iA Financial moved in January.

“Each window, basically, you can control,” he said. “Say we’re in a board room and we’re doing a video conference and we want it dark. We have an iPad and we can do real-time (adjustment of) how much light comes in.”

The system allows everyone equal access to natural light and the great views, he said.

View launched in 2007 and started installing the window systems in 2012, said Jeff Platon, the company’s vice-president of marketing. “We’re trying to transform real estate, one of the lowest-risk, slowest-to-adopt-t0-technology industries in the world.”

He said the system is powered by software which monitors real-time weather and sunlight and knows the location of each pane of glass. “The two primary missions are to reduce glare and to reduce the overall thermal heat.”

The company has completed roughly 22 projects in Canada, with another 30 locations underway.

“We’re doubling everything we did in the last five years, in the next 12 months,” he said, noting View has completed 450 projects around the world. “The company’s goal (is) to literally double in size every year for the next 10 years.”

Bosa said BlueSky has allowed other developers to tour the building and expects to expand the use of the glass throughout its commercial and residential portfolio.

“We would love to use it in all our projects, for sure.”