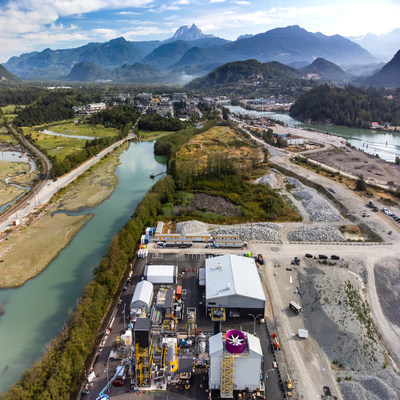 “Carbon removal technology such as Direct Air Capture needs early adopter customers to accelerate deployment scale,” said the CEO of BeZero Carbon, Tommy Ricketts in a statement. “This purchase by BMO is a landmark moment for the future of Direct Air Capture, and a strong signal to the market that this technology should become a critical part of net zero infrastructure.”

CE was founded in 2009 in Calgary by Harvard professor David Keith. In 2015 it moved to Squamish, B.C. to build an operational pilot plant. Its first carbon capture became a reality that same year. BeZero Carbon was founded in April 2020 with the aim to “accelerate the transition to a net-zero economy.”

How does it work?

Carbon Engineering’s DAC technology, paired with geologic sequestration, holds the highest rating, a AAA+, on the BeZero Carbon Rating Framework – a tool to assess the quality of voluntary carbon removal and offset solutions.

CE says that its tech is able to pull in the atmospheric air around it and extract the CO2 directly through a series of chemical reactions – much in the same way that plants and trees do, only faster. The captured carbon is transformed into a purified, compressed gas which can then be permanently stored underground or used as ultra-low carbon transportation fuels.

“As part of our Climate Ambition and our Purpose to Boldly Grow the Good, in business and life, BMO is committed to net zero in our own operations and to being our clients’ lead partner in their transition to a net zero future,” said Michael Torrance, BMO’s chief sustainability officer in a statement on the partnership.

We’re pleased to be working with BeZero and Carbon Engineering on high-integrity, large scale climate solutions such as Direct Air Capture, and to be the first bank to do so. By doing so we’re supporting the growth of a new market for Direct Air Capture and associated offsets, which will be critical for achieving ambitious Paris aligned 1.5C goals and going past net zero to being net negative GHG emissions.”

BMO pre-purchased its carbon removal units as the development of DAC facilities is ongoing. The first commercial facility from CE is expected to be operational in 2025. It is being developed in the U.S. and is aiming at capturing up to a million tonnes of carbon dioxide annually or the equivalent of 40 million trees. The company’s white paper also claims its tech is capable of doing so at US$100 per ton.

Since 2010, BMO has publicly committed to being carbon neutral.  It is part of the Net-Zero Banking Alliance (NBZA), a network of 94 banks in 39 countries aimed at reaching net-zero emissions by 2050. In March of this year, the bank announced a commitment to deploy $300 billion in sustainable lending and underwriting to companies pursuing sustainable outcomes by 2025.

BMO is the eighth-largest bank in North America, and as of July 31, 2021 has assets totalling $971 billion.