Canada can meet and even exceed its 2030 climate targets if the proper investments and changes are made to commercial, institutional and high-rise residential buildings over 25,000 sq. ft. according to a new report. 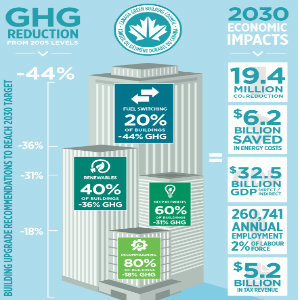 Investments and incentives for energy efficiency improvements to existing commercial, institutional and high-rise residential buildings over 25,000 sq. ft. Canada could reduce greenhouse gas emissions by 44 per cent from a 2005 baseline according to the report Building Solutions to Climate Change.

The Canadian Green Building Council (CaGBC) provides a number of recommendations meant to support the Vancouver Declaration on Clean Growth and the federal-provincial declaration from March 2016 committing Canada to meeting its targets under the Paris agreement on climate change.

The council says the energy-related cost savings would add up to $6.2 billion with direct or indirect GDP impacts of $32.5 billion.

Thomas Mueller, the CaGBC’s president and CEO, said the council has worked for a long time to reduce the environmental impact from buildings.

“When the government established the Vancouver Declaration and mentioned that the building sector was part of achieving the reductions in carbon emissions, we felt compelled [to take action],” Mueller said.

“There are dozens of reports that say energy improvement in new and existing buildings is the most cost-effective way to reduce energy-using carbon.”

The report notes that Canada is ranked sixth out of 23 counties in terms of energy efficiency policy but only 18th in actual performance.

As well it says that a number of national and international reports have concluded that energy efficiency improvements in the building sector is the most cost-effective approach for reducing energy use and carbon emissions – more than any other sector of the economy.

A key element to achieving this goal is investing in net zero buildings by supporting a national net zero building initiative. The creation of a Canadian standard to guide the industry is vital, according to the report.

If all new buildings above 25,000 sq. ft. were built to be net zero carbon between now and 2030, greenhouse gas emissions would be 17 per cent lower than those in 2005, the report maintains.

The report also recommends that the government put in place energy efficiency programs for federally-owned buildings over 25,000 sq. ft. It notes that such buildings account for three to five per cent of building sector greenhouse gas emissions.

“I think government has a really important role in terms of policy, in terms of leading themselves as building owners, to demonstrate to the rest of the country that it could be done on existing and new buildings,” Mueller said.

He also noted that government investment in such changes, perhaps in the form of revolving loans, would help spur such improvements. “I think those are really important in moving forward,” Mueller said.

The council also advises that energy benchmarking and reporting and disclosure initiatives are important. The CaGBC also calls for an expansion of Natural Resource Canada’s Energy Star portfolio manager program.

While the report notes that over 13,000 buildings to date have used the portfolio manager more investment is needed to expand the service to support a wider range of building types. It also needs more dynamic reporting capabilities to help the industry and government advance energy conservation efforts, the CaGBC says.

Mueller said that more benchmarking and energy disclosure would be a first, important step for building owners and managers when it comes to reducing greenhouse gas emissions.

It would enable building owners to understand where they are and where they need to make investments in order to reduce energy consumption, Mueller noted, adding it might mean investments for building operations, or through retrofits or just by switching to renewable energy sources.

Mueller also pointed out that a sound business case exists for the changes.

The employment gains from its recommendations would average 260,741 equivalent full-time jobs annually. Construction activity in 2030 alone would generate $5.2 billion in taxes to the three levels of government, while the social cost of greenhouse gas emissions avoided would add up to $960-million (in 2030 dollars).