CaGBC issues ‘a roadmap for retrofits in Canada’

A new Canada Green Building Council (CaGBC) report sets out actions for industry, non-profit organizations and governments to build a retrofit economy by 2030 that improves the performance of existing buildings and creates new economic opportunities. 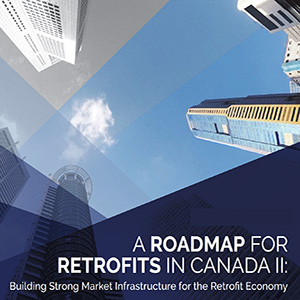 The Pan-Canadian Framework on Clean Growth and Climate Change aims to reduce greenhouse gas emissions by 30 per cent from 2005 levels by 2030. That’s more than 89 megatonnes of emissions. “A Roadmap for Retrofits in Canada II” aims to make that target achievable by outlining the policies and market infrastructure initiatives that must be implemented to spur the necessary investment.

“When we talk about climate change and buildings, everybody talks about new buildings,” said CaGBC president and chief executive officer Thomas Mueller. “That includes ourselves with net zero and zero carbon.

“But the fact is that between now and 2030, three-quarters of the carbon savings will come from existing buildings and not new buildings. We can’t build our way out of it.”

On average, green buildings outperform conventional buildings by more than 30 per cent in energy efficiency and other factors. Many large buildings with money behind them have already been retrofitted or improved operations to achieve these efficiencies.

The report focuses on market-based solutions that will stimulate deep retrofits in large B- and C-class commercial, institutional and residential buildings to help fight climate change and create new economic opportunities for Canadians.

“The federal government is doing fairly well with it old building stock,” said Mueller, who stressed the importance of all levels of government leading by example when it comes to retrofitting. “They have a good program and we’re working with them to do even more.”

The CaGBC has issued four calls to action for the Canadian building sector to realize its potential in supporting national carbon reduction targets:

Government action on its own is insufficient to build a retrofit economy that produces the desired environmental and economic results, according to Mueller.

“We need a private sector solution where the private sector invests in retrofits — not on a building by building basis, but on a more massive scale. We’ve worked with the federal government and asked them to allocate $1 billion to the Canada Infrastructure Bank to provide loans and those types of measures.”

Private sector capital must be unlocked

The report says that plenty of private sector capital is available domestically and globally for real estate and infrastructure projects. It just needs to be unlocked and tailored to retrofit projects by convincing those with the money that this effort has both investment and environmental value.

Canada’s retrofit economy has a potential to generate $32.5 billion in gross domestic product and more than 260,000 new jobs by 2030, according to the CaGBC. It’s asking private financiers, insurers and other financial intermediaries to lead with green underwriting practices and provide financing approaches for projects and risk-management products that foster building owner and financier confidence in managing performance risk.

“Showing them that retrofits are a viable and financially attractive source of return will be critical in moving the retrofit sector forward and establishing a retrofit economy in Canada,” said Mueller.

Building owners are asked to proactively disclose building energy and carbon performance and share data on the performance of retrofit projects. Industry stakeholders are urged to develop consistent standards of practice that will deepen understanding of the business case for building retrofits and support a strong pipeline of retrofit projects that are confidently financed and successfully delivered.

Governments at all levels must continue to build market awareness of the value of the retrofit economy and continue to build the policy and regulatory infrastructure to support a well-functioning retrofit marketplace, according to the report. It says this can be assisted through institutions like the Canada Infrastructure Bank and the Green Ontario Fund and by providing more incentives to generate greater data transparency and liquidity on building performance and successful retrofit projects.

The report says the policy and regulatory infrastructure must: expand the eligibility of inter-governmental infrastructure funding to include energy efficiency and carbon reduction building retrofit projects; accelerate the modernization of building codes and the creation of retrofit codes that establish minimum energy and carbon performance thresholds; and, work with industry, education and training providers to develop programs, curriculum and credentials that will build the green labour market for the retrofit economy.

“When it comes to carbon reduction, 2030 is basically tomorrow,” said Mueller.

“We really need to be serious and action-oriented to actually see measurable reductions at scale. We need to accelerate our efforts.”