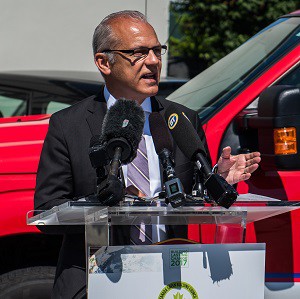 The CaGBC calls the standard, released at a media event Monday in Vancouver, “the next evolution of green building.” It is designed to be broadly applicable for new and existing buildings across Canada and is the first program of its kind to make carbon reduction the key indicator for building performance.

“While there is no doubt that Canada’s building sector has been dramatically transformed over the last two decades, the time has come to be bolder and more ambitious,” Thomas Mueller, president and CEO of the CaGBC, said in a release introducing the standard.

“The CaGBC’s Zero Carbon Building Standard brings focus to carbon emissions reduction, and defines new levels of building performance. This standard will help the building industry to show leadership in eliminating emissions from buildings and contribute to shaping of Canada’s climate future.”

A zero carbon building (ZCB) is “one that is highly energy-efficient and produces onsite, or procures, carbon-free renewable energy in an amount sufficient to offset the annual carbon emissions associated with operations.”

There are two designations available.

After one year of occupancy, if these new buildings can prove a zero carbon balance over the course of 12 months, they will earn Zero Carbon Building – Design + Performance status.

Existing buildings can seek the Zero Carbon Building – Performance designation. These buildings must meet most of the same demands as the new buildings, but are exempt from needing to produce on-site renewable energy or achieve the TEDI targets.

TEDI measures the amount of heat loss from the building, reported in kilowatt hours per square metre of floor space per year. The targets are based on the climate zone where the property is located.

ZCB building owners are required report their peak energy demand and, though there are no targets set in this area, must mitigate the effect on local grids, which often have to fire up fossil-fuel burning hydro sources to meet peak demands.

The standard is designed to help meet both national and international carbon reduction goals in an effort to curb climate change. The Canadian government, in its Vancouver Declaration for Clean Growth and Climate Change, called for reducing greenhouse gas emissions 30 per cent below 2005 levels by the year 2030.

“Those are the high-level targets that we are aiming to hit,” CaGBC vice-president of Green Building Programs Mark Hutchinson said recently in Ottawa while providing an update on how the Net-Zero Carbon Standard was developed. “Basically, that is our target that we have to acknowledge as an industry.

“We have to eliminate carbon from buildings.”

Monday’s event kicked off several days of activities in Vancouver for the CaGBC. It was set to host a full-day Net Zero Carbon Buildings Summit Tuesday to provide industry professionals an in-depth look at the standard.

The council then is set to host its Building Lasting Change 2017 conference Wednesday and Thursday.

Project registration for the standard begins through the CaGBC on Sept. 5.

The council is also involved in 16 pilot projects across Canada, ranging from structures such as a new Fire Hall 17 in Vancouver to small multi-residential projects to institutional buildings, to office towers being constructed in Vancouver and Toronto by Oxford Properties.