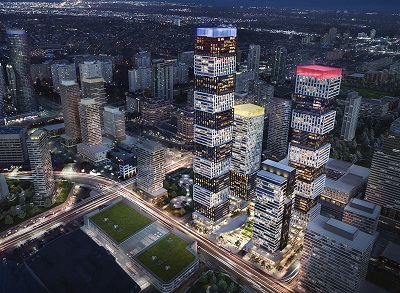 At 66 storeys, EX3, which will flaunt a blue rooftop, is one of four under development, two of which will be powered by geothermal energy.

A total of 186 geothermal boreholes were completed in early April and will provide the alternative energy source to the EX3 condo tower, as well as a 31-storey residential and hotel tower.

“It was a technology that we had been wanting to incorporate for a long time,” said Joseph Feldman, vice-president of development for Camrost.

Feldman said Camrost could have used a geothermal system to power all four towers at the Exchange District but did not want to introduce a new element to purchasers who had already bought into the other buildings.

“We’re about to launch this last building as a condo,” he said, “so we have ample time to integrate it into the condominium docks and disclose to all the future purchasers of that building.”

Making up the remainder of the towers at the Exchange District is a 60-storey, red-roofed residential condo known as EX1, and a yellow rooftop, 42-storey residential building with a gym and restaurant called EX2.

Camrost has partnered with Diverso Energy, a geothermal energy service provider, on the project. The buildings will provide low-carbon heating and cooling solutions without the use of heating boilers or rooftop cooling towers.

The Toronto-based developer has also teamed up with Mitsubishi Electric, which is providing its Variable Refrigerant Flow (VRF) system to the properties.

The VRF system revolutionizes the approach to HVAC systems in multiresidential towers, offering such features as simultaneous heating and cooling and heat recovery capabilities.

Feldman said when it comes to the VRF system, there are benefits residents will see daily, such as reduced noise and less maintenance due to a simpler design compared to traditional heating and cooling systems.

“One of the best things about the VRF, and something necessary for it to run, is it does have year-round heating and cooling and it’s very clever in the way it’s designed,” said Feldman.

VRF has a central condenser on each floor with a hot and cold chamber, Feldman explained. When a unit is using air conditioning in a suite, it pulls from the cold chamber and the energy, or heat, being ejected is stored in the hot chamber.

Traditional heating and cooling methods reject the heat or cool and more energy is then needed to regenerate hot and cold when needed.

“It’s the whole beauty of this VRF system,” said Feldman. “If you actually look at the components, it’s all very simple, it’s just well-thought-out.”

There is also a water loop on each floor that helps regulate the heating and cooling condenser on each level without requiring power.

All of these tie into what Feldman called the geofield.

“It helps regulate seasonality so we have the perfect storm in this building.”

Combining the two systems, Feldman said geothermal energy is primarily used as a long-term regulator, while the VRF is a short-term solution that works during the bridge seasons.

“So, you have the best of both worlds,” he said. “From an actual day-to-day perspective, it’s identical. You don’t notice a difference in a building that has geothermal . . . it purely comes down to carbon footprint and cost savings.”

Those cost savings, Feldman said, based on Camrost’s agreement with Diverso, are projected to be more than $4 million of direct savings to building residents over a 30-year period.

From a builder’s perspective, Feldman said implementing a geothermal system can delay or pause the construction of a building.

Diverso, however, was innovative with the Exchange District project.

Typically, for geothermal projects a hole must be dug and drilling creates the boreholes for the system, which pauses construction.

“This makes it prohibitive because as the developer you’re delaying your project,” said Feldman. “What Diverso has done here is a step in the right direction.”

Diverso was able to frontload its drilling from grade prior to Camrost starting excavation for the building, something Feldman said was “genius.”

“The next step in this is how can they begin their drilling without interrupting or delaying the start of our construction,” said Feldman.

Launched in 1976 by Feldman’s father, and president and CEO of Camrost, David Feldman, the developer has had its fingerprints on several GTA communities.

Camrost projects include The Residences of Upper East Village, The Foxbar Collection, The Palace, Royal Bank Tower and the Exchange District, which has won over a dozen provincial, national and international awards, including the only Canadian recipient of 2020’s National Awards (Las Vegas) Master Planned Community (silver award).

Joseph Feldman joined Camrost seven years ago after a stint in investment banking.

“I’ve been in real estate my whole life, but this has been a great industry to work in, especially in the GTA with how fast construction technologies are improving and how quickly the industry landscape is changing,” he said.

“It’s been a very exciting seven years at Camrost.”