Sustainable Canada Dialogues, a country-wide group of over 60 scholars, has issued a progress report on Canada’s progress in initiating climate change action at home. 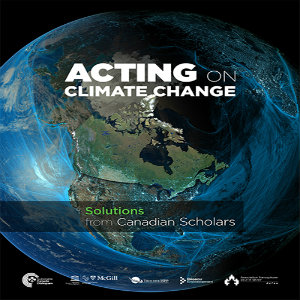 The cover of a Sustainable Canada Dialogue report on climate change

The group said that the close of the Marrakech climate conference seemed like a good time to assess the federal government’s actions.

Catherine Potvin, the group’s convenor and spokesperson, said, “It’s one thing to go internationally and say Canada wants to be one of the high ambition countries, try to limit emissions, temperature increase to 1.5 [Celsius], and we fully support this bold statement.

“But that needs to translate into bold policy at home. So we think our role is to make sure Canada adopts clear policy at home, coherent with the target and the coalition which they themselves decided to join.”

Potvin is a professor in the biology department at McGill University in Montreal and the Canada Research Chair on Climate Change Mitigation and Tropical Forests: Science for Empowerment.

Many other prominent Canadian academics have lent their voices to Sustainable Canada Dialogues, which, among other things, previously has released extensive policy documents around climate change in Canada.

Canada made two significant steps in 2016

Sustainable Canada Dialogues maintains that with the adoption of the Paris Agreement, countries of the world have officially embarked in a global race to implement ambitious domestic climate policy to reduce green-house gas emissions at the planetary-scale.

“This process is not unlike the Olympics games where countries get together to compare their strengths and performance. If Canada wants to be a medalist in 2020 domestic climate policies must rapidly be adopted to accelerate the low carbon transition.” said Potvin.

She said the group believes the government made two significant steps in the last year between the COP 21 and COP 22 conferences.

She called the announcement of a price on carbon across Canada “definitely an encouraging gesture. This is a necessary step in our mind.”

Potvin complimented the design of the carbon plan, noting that it remains revenue-neutral for the federal government, while returning the profits to the province or origin, which she called “appropriate.”

Canada is taking seriously the transition to low carbon development

The other positive action is what Potvin termed the federal government’s “vast investment,” $125-million toward green infrastructure. “If you actually look at the details of the investment that’s occurred so far, there’s a large part of this investment that goes to public transportation. So this is good news.”

The report goes on to say that it looks forward to seeing projects that will deliver “transformative shifts toward clean energy and robust public transportation.”

At the same time, it cautions that the impact of the infrastructure investment plan will depend on selecting projects on the basis of what will best contribute to low-carbon and sustainable outcomes.

On the downside, Potvin said the group is concerned with the federal government’s decision to approve the Pacific Northwest Liquified Natural Gas project.

“The impact assessment study says this is going to increase B.C.’s emissions by eight per cent and the facility would be one of the largest sources of greenhouse gas in Canada,” Potvin said.

The report also cited other “small steps” in the right direction toward climate action on the part of the federal government.

As well, the report called Canada’s adoption of the UN Declaration on rights of Indigenous peoples “an important step in the right direction.

“Given that the need to adopt a low-carbon energy future could affect Indigenous peoples and communities, we hope that Canada will honour its commitments and ensure all aspects of this transition respect Indigenous territorial rights and their special socio-economic and cultural circumstances.”