Aviation sector stakeholders are calling for an all-hands approach from the federal government an... 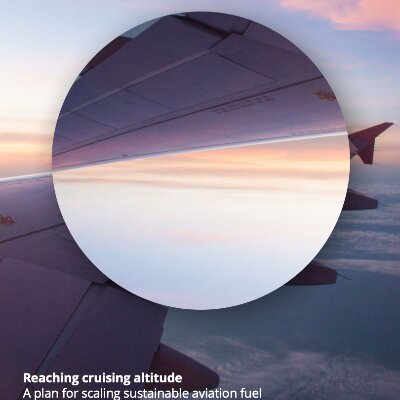 A report from Deloitte Canada says Canada could produce a half-billion litres of sustainable aviation fuel by 2030 — if the right policy measures are implemented.

“Meeting Canada’s net-zero commitment by 2050 requires that every sector in the economy undergoes deep decarbonization, including the aviation industry,” Nathan Steeghs, partner, risk advisory at Deloitte Canada, said in a statement. “Aviation has fewer and less affordable emission-reduction options than most sectors, and its share of global emissions will increase over time.

“Replacing petroleum jet fuel with SAF can have a tremendous and direct impact on decarbonization. This report reinforces our commitment to tackle climate change through bold action.”

Deloitte Canada, headquartered in Toronto, is a multinational professional services network with offices in over 150 countries and territories. The report, titled Reaching cruising altitude: A plan for scaling sustainable aviation fuel in Canada, calls for the creation of a multi-agency aviation task force to spur growth and innovation.

Produced from renewable feedstocks, SAFs can be made from forest and agricultural residues, industrial fats, oils and grease, municipal solid wastes and CO2 captured from industrial processes or the air.

This differs from low-carbon aviation fuel, which is produced using petroleum in a less-emissions-intensive process, and traditional petroleum jet fuel.

Most SAFs used in planes are blended 50-50 with traditional petroleum fuels. However, many across the SAF value chain believe blending limits required for travel will rise in the coming years as new aircraft technology emerges.

As a result, the industry is calling on policymakers to lower barriers to entry by developing a regulatory framework and boosting partnerships across the clean fuel, corporate, investment and aviation sectors.

Opportunity for SAF growth in the industry

Aviation emissions are among the most difficult to reduce. In 2019 (prior to the pandemic, and the resulting dip in air travel), the report states domestic aviation in Canada consumed more than eight billion litres of jet fuel.

The Canada Energy Regulator forecasts consumption will increase to 10.6 billion litres by 2030 if action isn’t taken.

The report outlined strategies to decarbonize the sector. Reducing travel, switching to lower-emission modes of transportation and finding efficiencies in flight paths were among the recommendations.

Moreover, replacing existing aircraft with battery and hydrogen-powered jets for short to medium-haul flights is also proposed. Additional recommendations include the need for more shared data and reporting tools, and standardized sustainability criteria.

The report’s focus, however was on accelerating SAF production, which it says could have the greatest impact on aviation decarbonization.

While Canada has been slow to build commercially scaled plants, Canadian-based producers are investing in pilot production facilities and investors are backing fuel-producing projects.

The report estimates 170 to 200 small to medium facilities will be needed to meet the industry’s net-zero 2050 target.

One of the biggest obstacles is the cost of SAFs. According to the report, prices can be three to five times higher than petroleum fuel – some estimates project as much as eight times more expensive.

Those costs could impact the flight industry long-term, both with consumers and investors.

KLM Royal Dutch Airlines, a Netherlands-based airline, announced in January it would add an automatic SAF surcharge to ticket prices — ranging between one to 12 euros, depending on the distance flown and the type of seat booked.

Still, KLM plans to introduce new electric- and hydrogen-powered aircraft into its fleet by 2035; by 2050, the airline has a goal to become net zero.

Earlier this year, a group of 60 domestic, international and cargo airlines operating in Canada aligned to create the non-profit Canadian Council for Sustainable Aviation Fuels (C-SAF). It has 100 members from some of the world’s biggest airlines, including WestJet, FedEx, American Airlines, UPS, Porter Airlines, Sunwing Airlines, Lufthansa and Air Canada.

“Canada is well-positioned to lead in the production of clean fuels, creating jobs and supporting continued economic growth for the country,” Geoff Tauvette, executive director at C-SAF, said in a statement. “However, other jurisdictions are moving quickly on policies to incentivize the use of Sustainable Aviation Fuel, leading to the expansion of the renewable diesel and SAF markets outside of Canada.

“A global SAF race has started. We must take action now.”

Recently, Air Canada has added four commercial flights that will travel using sustainable aviation fuel. Sourcing its SAF from Neste, a renewable energy company based in Finland, the offering focuses on corporate and cargo customers.

“Air Canada is investing in SAF as one of several transformational strategies to support its net-zero emissions by 2050 commitment,” Teresa Ehman, senior director of environmental affairs at Air Canada, said in a statement.