A redesigned century home, a new library and an urban high-rise that acts as a safe shelter for women fleeing abusive relationships are among the nine buildings cited as the most sustainable in Canada. 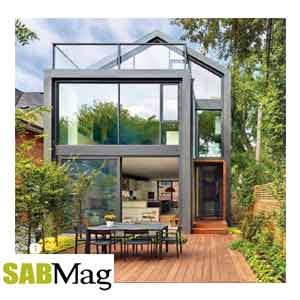 The awards are jointly run and presented with the Canada Green Building Council and recognize excellence in the design and execution of Canadian residential and non-residential buildings of all types.

While at first glance the buildings that won for 2016 may not seemed to have any thread trying them together, the Ontario Association of Architects noted that this year smaller projects took most of the honours.

In contrast, in 2015, large commercial and institutional projects won most of the awards.

A century-home transformed into a an energy efficient residence

One of this year’s national winners, for instance, was the Skygarden House in Toronto (shown in image).

The jury cited the house as a renovation project that transformed an energy-intensive, century-old, single-family home into a bright, open and efficient residence.

“The project is part of an overall strategy to revitalize the urban fabric instead of razing it, creating livable environments for modern lifestyles in smaller footprints.”

The renovation incorporated a number of passive home features such as natural ventilation and passive cooling combined with more active systems such as in-floor radiated heating, low-flow plumbing fixtures and high-efficiency lighting.

Targeting LEED Gold, the building features a displacement ventilation system that provides a 50 per cent reduction in energy costs over a code-equivalent reference building.

The library is designed to allow high volumes of natural light in through the north and south facades, while a roof overhang provides shading from excessive solar heat during the summer.

The installation of low-flow urinals, showers and faucets throughout the building has achieved a 52 per cent reduction in water consumption. That is equal to the amount contained in 2.8 Olympic-sized swimming pools.

In its citation for the Budzey Building in Vancouver, the jury praised the public-sector project as a “model for energy efficient, high-rise residential design,” and called it “an example of architecture that could truly transform the lives of its embattled residents.”

The building is designed to LEED Gold standards and to only employ a maximum of 10 per cent end use energy from fossil fuels. Features include air-to-water heat pumps for energy recovery ventilation; in-suite radiant hot water heating; and solar shading on the south and west facades.

According to the jury notes, as “an exemplar of both environmental and social sustainability, the building is featured in the Vancouver Green Building Audio Tour.”

The Toronto house came about with the blending of two households into one after a professional couple with a young son sold their one-bedroom condominium, and their parents downsized after becoming empty nesters.

To accommodate the two families, the project was designed as a duplex with a second suite and bed-sitting room, which made the house both economically feasible and allowable under zoning bylaws.

The home includes a fully insulated concrete form basement for passive cooling and ventilation; and a brick facade composed of batches of “left-over” bricks that a supplier deeply discounted for the “low-budget build.”

The house employs a high-efficiency heating system that is designed to be shut down in different sections of the home when not in use.

The project “confirms that increased density can feel expansive, include large, outdoor spaces and embrace new ways of living in old neighbourhoods,” the jury added.