Canada contains less than 0.5 per cent of the world’s population, yet it contains 18 per cent of... 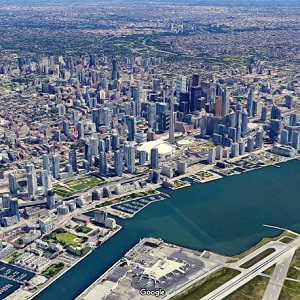 A view of downtown Toronto. With Vancouver and Montreal, Toronto has signed on to a global net-zero carbon buildings initiative. (Google Maps image)

Toronto, Vancouver and Montreal have all made the pledge as part of the World Green Building Council Net Zero Carbon Buildings Commitment. The program will officially kick off Sept. 13 at the Global Climate Action Summit in San Francisco.

The WorldGBC’s definition of a net-zero carbon building is a building that is highly energy-efficient and fully powered from on-site and/or off-site renewable energy sources. The WorldGBC says in a release announcing the initiative such “bold commitments” are essential steps in delivering on the goals of the Paris Agreement and keeping the global temperature rise below 1.5 Celsius degrees.

Buildings emit 50 per cent-plus of GHG

Buildings in urban areas are one of the largest sources of greenhouse gas emissions, and typically account for more than half of a city’s emissions. In London, Los Angeles and Paris, buildings account for well over 70 per cent of the cities’ overall emissions.

Currently, half a million people die prematurely each year due to outdoor air pollution caused by energy used in buildings, the WorldGBC says.

Part of the challenge for the cities is municipal governments do not have direct control over all the buildings within their boundaries. The commitment includes a pledge to work together with provincial and federal governments and the private sector to drive this transformation and calls on national governments for equal action.

The commitment has been orchestrated by C40 cities, a global group of major cities committed to delivering on the most ambitious goals of the Paris Agreement at the local level.

“We are excited to be signing the C40 Net Zero Carbon Emissions Declaration along with other major cities around the world,” said Vancouver Mayor Gregor Roberston in a prepared statement. “Vancouver’s Zero Emission Building Plan will not only reduce GHG emissions from new buildings by over 60 per cent but is also driving our green economy with a 53 per cent increase in green building jobs since 2010.”

This pledge from cities is part of the World Green Building Council’s Net Zero Carbon Buildings Commitment for businesses, cities, states, and regions, which opened for recruitment in June.

In addition 13 of the cities, including the Canadian participants, commit to owning, occupying and developing only assets which are net-zero carbon by 2030. To achieve this, cities will:

– evaluate the current energy demand and carbon emissions from their municipal buildings, and identify opportunities for reduction;
– establish a roadmap for their commitment to reach net-zero carbon municipal buildings;
– report annually on progress towards meeting their targets;
– and evaluate the feasibility of including emissions beyond operational carbon (such as refrigerants).