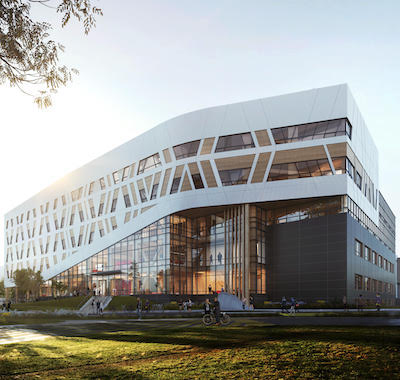 “The students are going to love being in this space,” said DIALOG Design founding principal Craig Applegath during an interview with SustainableBiz.

At this point known only as “Building A”, the six-storey, 138,000-square-foot project will be part of Centennial College’s Progress campus in Scarborough.

The COVID-19 pandemic has thrown “a bit of a monkey wrench” into the timeline “because we were supposed to start the renovation of the existing building that this building attaches to in June,” Applegath said. “We just got our building permit this week from the municipality, so we’ll start now.”

The A Block building expansion, designed in conjunction with Hamilton-based Smoke Architecture and built by EllisDon, is slated for completion in 2023. EllisDon is scheduled to break ground on the building, which will be linked to an existing A Block building, this fall.

Features of Building A

The mass timber structure will be manufactured locally — with materials sourced via Nordic Structures in Montreal — through sustainably harvested and FSC-certified wood. The volume of timber being used is roughly 3,600 square metres.

The building targets Net-Zero Carbon and LEED Gold certifications through the CaGBC.

“Mass timber is a great way to sequester carbon, support sustainable forestry, and the warmth of that natural material really resonates with people,” said Eladia Smoke, the principal architect and founder of Smoke Architecture.
“The building is targeting net-zero carbon with a solar photovoltaic array on the roof, complete with high-efficiency systems, a robust building envelope (windows, walls, roof), and an emphasis on natural daylight throughout.”

Energy used by the building will be supplemented by the photovoltaic panels and Renewable Energy Certificates (RECs). About five per cent of building energy requirements will be powered by solar photovoltaic renewable energy.

The green roof doubles as both a location for photovoltaics, and as a teaching tool for students.

On the energy front, DIALOG says the building’s estimated annual energy use intensity (EUI) is 104 kWh/square metre. That equates to a cost of about $14 per square metre per year, and a 53 per cent cost savings versus the LEED standard.

It’s projected to use 1.25 million kWh per year, and export 69,000 kWh of renewable on-site energy annually.

The thermal energy demand intensity (TEDI) is projected at 29.4 kWh per square metre per year.

Inside the building, students will be surrounded by the mass timber itself since “it’s all exposed.”

In terms of future-proofing, the main systems (mechanical, electrical, ventilation) run down the hallways. Applegath said that means if major renovations were required inside the building, “you could take down classroom walls” without affecting any of those systems. This reduces time and potential wastage.

One unique aspect of the building is that it had to be “indigenously inspired” and to embody the concepts of reconciliation, Applegath said. Smoke’s firm was brought in and “that was a wonderful experience too … the collaboration really produced some amazing results.”

The building was designed to only be entered from the east, a concept which was “really difficult to pull off,” said Applegath. “We actually figured out how to do this and make it work really well.”

The expansion includes an Indigenous Commons space “that is so beautiful. It’s just so cool to be at, and it goes on to this inner courtyard garden,” said Applegath. A fire pit was incorporated into the commons space “so they can have meetings, Indigenous cultural gatherings, or they can have student gatherings of any type, any culture.”

The design also embraces Indigenous approaches to living in harmony with nature. There is ample access to natural ventilation, daylight and outdoor views in both academic and administration areas. Indigenous plants and vegetation will also be used in the landscaping to support local ecosystems.

“The building connects to the land with indigenous species in an interior courtyard and front entry garden, both places for students to pause and enjoy nature, or even have outdoor classes,” Smoke explained.

Substantial completion is scheduled for October 2022, and it’s expected to be occupied for classes in January 2023 for the winter term.

Applegath, who co-founded DIALOG 16 years ago, said he’s excited about this project for a number of reasons.

“Our two big passions are green design and community well-being,” said Applegath. It also incorporates “three things that I think right now, in Canada, are really important for our future.”

EDITOR’S NOTE: This article was edited after being published to add quotes from Eladia Smoke.