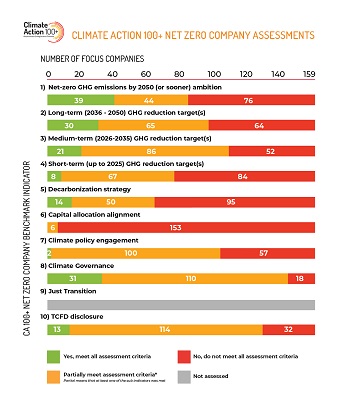 Climate Action 100+ (CA100+) released its first assessments of the world’s largest greenhouse (GHG) emitting companies, including six Canadian businesses, and not one performed at a high level on all indicators.

With more than $54 trillion from a coalition of over 570 investors, including 30 from Canada, CA100+ launched in 2017 as an initiative aimed at helping large GHG emitting companies achieve a net-zero company benchmark goal and fall in line with the 2015 Paris Agreement.

In order to measure its net-zero benchmark, Climate Action 100+ looks at 10 indicators (one yet to be assessed) to assess a company’s progress. These indicators include short-, medium-, and long-term emissions goals, including whether the company has the ambition to reach net-zero GHG emissions by 2050 or sooner. Other indicators include a decarbonization strategy, capitol allocation alignment, climate policy engagement, climate governance, whether the company considers the impacts of transitioning to a lower-carbon business model on its employees and community (not yet assessed) and if they have committed to implementing the recommendations of the Task Force on Climate-related Financial Disclosures.

The key indicator for the net-zero benchmark – whether a company is meeting the long-term goal of becoming a net-zero emitter by 2050 – was recently analyzed by the non-profit organization As You Sow, which promotes environmental and social corporate responsibility. It concluded that of the 159 focus companies (eight were added too late to be assessed, bringing the total to 167), fewer than 25 per cent are on track to meet that goal and fall in line with the Paris Agreement.

Danielle Fugere, president of As You Sow, said in a recent press release that though the assessments show that momentum toward climate action is picking up, much work needs to be done by the vast majority of large GHG emitters.

“These ratings allow investors to differentiate which companies are leading in aligning their businesses with the Paris Agreement’s 1.5-degrees Celsius goal, a critical indicator of future value, and those whose inaction portends growing risk to their companies and to the climate,” said Fugere.

“As more company leaders step forward and best practices are demonstrated and rewarded, the momentum for swift action will only increase.”

Prior to joining As You Sow, Fugere was the executive director of the Environmental Law Foundation, where she focused on environmental health and water protection. She also worked as the western regional program director for the non-profit Friends of the Earth. Fugere holds a juris doctorate degree and a BA in political economics from the University of California, Berkeley.

Of the six Canadian focus companies – Canadian Natural Resources, Enbridge, Imperial Oil, Suncor Energy, TC Energy and Teck Resources – only Enbridge and Teck Resources are meeting partial requirements to achieve net-zero emissions by 2050. All others are not meeting any criteria to reach the goal.

In total, the assessments reveal that 83 of the companies, or 52 per cent, have announced an ambition to reach net-zero by 2050 or sooner. Half of these companies, however, do not cover the full scope of their most material emissions.

Climate Action 100+ has also determined through the assessments that it is “critically important” for companies to establish more robust short- and medium-term emissions targets to work toward their objective.

“The Climate Action 100+ net-zero company benchmark moves us from ‘why’ to ‘how’ companies make the net-zero transition. It sets out the indicators that matter to investors, including CapEx, board governance, and climate reporting,” Anne Simpson, managing investment director, board governance and sustainability, CalPERS and Climate Action 100+ steering committee member, said in a release.

“We cannot manage what we cannot measure. The benchmark gives us the tool needed for engagement and to inform our proxy voting. The first assessments show the scale of ambition, where we are and where we need to get to, with measures along the way.”

The poorest performing indicator was how focus companies were managing capital allocation alignment, with 153 not meeting any of the necessary criteria.

The indicator with the fewest companies failing to meet any criteria is climate governance, which found that 31 were meeting all criteria, 110 at least some, and 18 not meeting any.

No assessed company performed at a high level across the nine indicators, and according to CA100+ no company has fully disclosed how it plans to achieve its goals to become net-zero by 2050 or sooner.

“The assessments provided by CA100+, an initiative with wide investor support, are the latest example of a clear signal from investors on the actions they expect companies to take on climate change,” Lila Holzman, senior energy program manager for As You Sow, said in a release.

“We look forward to seeing this tool evolve and provide a baseline bar that all companies must meet.”

CA100+ was conceived in the wake of the 2015 Paris Agreement by investors aiming to ensure the world’s largest corporate GHG emitters take tangible action to curb their carbon footprint and keep the increase in global average temperatures to below 2 C.

The initiative has seen 130 per cent growth in investor participation since its 2017 launch, with investors engaged across 33 markets and representing over 50 per cent of all global assets under management.

Also striving to encourage change, As You Sow, founded in 1992, believes corporations have a responsibility to make decisions that protect the environment, as well as human rights.

As a non-profit, it engages with corporate CEOs, senior management, and investors to help “change corporations from the inside out,” through shareholder advocacy.

As You Sow advocates for change in several sectors, including energy, environmental health, waste, CEO pay and social justice.

Carbon and climate to take centre stage in 2021