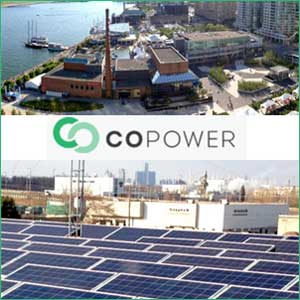 It’s money. Installing rooftop solar power, geo-thermal energy systems, or even swapping out thousands of inefficient lightbulbs for high-efficiency LEDs can be an expensive and daunting prospect.

The technology is mature and cost-competitive, green proponents claim – there just needs to be a better way to finance it.

A potential game-changer for building owners is the (very) recent emergence of financing outfits with a more affording greening model.

One of those, Montreal-based CoPower, last month announced the offering of its first national “green bond” to a national audience of investors.  All investors needed to make a minimum $5,000 investment in a piece of two clean energy projects that is to generate a five year, five per cent annual return.

In a case of regulations catching up with the real world, it was changes to securities legislation in Ontario that now allow small-money investors to participate in deals previously reserved for accredited investors.

“What has happened in the last decade is all of these technologies to address energy at the building level have really matured to the point where they are extremely cost-effective,” said David Berliner, CoPower’s chief executive.

Difference is in scale

CoPower’s business model is not much different than what a homeowner would look for when installing a green system: a third party would install the system with a payback over years or decades, arrange financing for the upfront costs and share the benefits until the outstanding loan is paid off.

What is different about CoPower’s setup is scale and the vastly greater liquidity that comes with the ability to sell the green power benefits to investors both large and small using an online platform.

It partners with established engineering firms specializing in the green space and it takes care of the funding for the building owner.

“It is a zero-money-down solution,” said the CoPower CEO, who likens the model to the auto industry expanding with long-term financing options.

“It expanded the ability for more people to buy cars. Similarly, financing for energy-efficiency allows more vendors and engineering firms that are talking to building owners to help them close more deals and say, ‘You don’t need to delay two years until you have the budget to do this LED retrofit or geothermal installation and lose two years of saving in the interim; we can get you started today.’ ”

CoPower has been selling its model to wealthy accredited investors since 2013 through private fund raises but enjoys a far larger investment market this year with the ability to sell its green bonds to those with a minimum of $5,000.

The impact of the securities regulations that allow for broader public offerings was readily apparent in its first green bond raise last month: Green Bond 1 raised $300,000 in just three weeks. “We were very pleased.”

Good for both sides

Berliner sees the appeal of the green bond funding approach being attractive to both commercial real estate players and investors.

“So what we can do using a technology-enabled platform is be the marketplace that connects the two.”

Berliner said the company is already working on Green Bond 2 and has lined up similar energy-efficiency upgrade projects (solar PV and LED lighting retrofits) and said the next offering will be of similar size. “Again it will be a small pool.”

That’s just the start, however. Berliner said the company’s long-term goal is to raise $100 million within two years, which would be comprised of individual projects ranging from $250,000 to $2 million.

Berliner said he doesn’t have to look far to see opportunities for his outfit.

“Most of our existing building stock today is still going to be there in 30 or 40 years. The opportunity to go in and profitably retrofit existing buildings is the biggest low-hanging fruit. That opportunity exists across the building sector, whether you are in the commercial and industrial space or in the residential and condo space.”

He cites a recent Goldman Sachs research report that indicated the biggest green energy opportunities in the near future are in the areas of solar PV power, LED lighting, onshore wind and electric vehicles. CoPower’s sweet spot, of course, is in those first two technologies.

“Those two are year-over-year just booming.”

Given the early stage CoPower and its business model are in, Berliner is not too worried about competitors and in fact even welcomes the prospect.

“The space is so big in terms of the opportunity to retrofit in hundreds of thousands of buildings across Canada that I think other companies that are coming in and trying to make the pie bigger is only helping build a track record of the industry.”

P
Paul Brent Writer, Editor, Media Trainer
Paul is a writer, editor and media trainer based in Toronto with over 25 years of experience as a business reporter. He has written for Canada’s major news services on staff including the National Post and subsequently as a freelance business reporter.