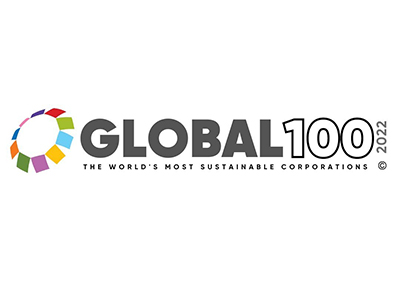 Knights analyzes the companies across 23 metrics, some of which include the company’s ranking in its ‘peer group,’ its revenue to Scope 1 and 2 CO2e rates, the cash taxes paid to profit ratio over past five years, the ratio of CEO compensation to average worker’s compensation, the per cent of board of directors who are not male and the per cent of capital expenditures, R&D and acquisitions that are categorized as “clean” under the Corporate Knights Clean Taxonomy.

50 per cent of the ranking is determined by the per cent of revenue earned from products and services that are categorized as “clean” under the Corporate Knights Clean Taxonomy.

The top-ranked global company is Vestas Wind Systems of Denmark. Among many other sustainability initiatives, Vestas has introduced a circularity roadmap and governance structure, and its carbon emissions reduction targets are validated as in line with the 1.5 degree scenario of the Paris Agreement by the Science Based Targets initiative.

At present, Vestas is responsible for nearly one third of globally installed wind power capacity.

Transcontinental is the highest-ranked Canadian company at 16, a marked improvement over its 2021 position of 45. With a score of B+, the Montreal-based printing company stood out for its sale of eco-responsible products, its clean investments, and the gender diversity of its board of directors and senior management.

Just below it is Stantec, headquartered in Edmonton, which saw a year-to-year drop from 5th to 17th. Despite this, it was given first place in Corporate Knights’ Professional, Scientific, and Technical Services peer group as well as the Construction and Engineering Global Industry Classification Standard.

Below it once more is Quebec’s Cascades, which dropped a single place to 18th. Its third consecutive year on the list, the packaging company also ranked first among its peer group. In its first appearance on the list in 2020 it placed 49th.

A bit further down the list is the Canadian Pacific Railway. For its first-ever appearance, the railway placed 34th. It was also the top performing freight transportation company globally. In November, it was also added to the Dow Jones Sustainability Index North America (DJSI) for the second year in a row.

IGM Financial dropped to 41st from 29th in 2022. The wealth and asset management out of Winnipeg was singled out by Corporate Knights for its top quartile performances for clean revenue, clean investment, paid sick leave, performance for female representation at the executive and board level and sustainability pay links for senior executives.

Teck Resources, a mining company out of Vancouver, on its fourth straight year placed at 74th with a C score. That position represents a significant improvement from 91st the previous year. Teck has also been named one of the Best 50 Corporate Citizens by Corporate Knights for 2021. It is ranked first in the metals and mining industry on the S&P Dow Jones Sustainability World Index (DJSI), Sustainalytics and Vigeo Eiris, and is  also ranked AA by MSCI for ESG performance.

For its first time on the list, Gildan Activewear placed 79th with a C. In September, it placed on the DJSI for the ninth year in a row, and is the only apparel company on the North American index.

Immediately following that is the Bank of Montreal, also with a C. The placement is marked by a drop from 47th to 80th.

Cogeco placed 81st, also with a significant drop from 68th the previous year. Despite its C score here it had received an A score from CDP for environmental transparency.

Agnico Eagle Mines is 86th, marking yet another drop from 73rd. It was given the ranking for its efficient use of energy, excellent safety record, paid sick leave and achieving top third-party certification for responsible mining of minerals essential to the low-carbon economy.

Last on the list is Canadian Tire, squeezing in at 98th, a one-place improvement from last year. Despite its D score, Corporate Knights calls the company “a leader among retail peers for its relatively high percentage of green-certified products and above-average carbon efficiency and racial diversity on its executive team.”

Corporate Knights is a media, research and financial information products company based in Toronto and founded in 2002. Since 2012, it has also spearheaded the creation of the Council for Clean Capitalism, a multi-industry group of leading Canadian companies dedicated to advocating economic and social policy changes that reward responsible corporate behaviour and remove barriers to clean capitalism.