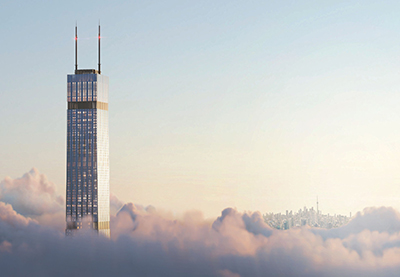 Canadian design firm DIALOG has filed global patents for a hybrid timber floor system (HTFS) which it hopes to utilize in super-tall skyscrapers.

Until the patent is approved, DIALOG is working with global construction firm EllisDon on developing scaled panels for thorough structural testing.

DIALOG’s 105-storey Hybrid Timber Tower design concept for Toronto was named by Fast Company Magazine as one of its World Changing Ideas of 2021. The HTFS combines cross-laminated timber (CLT) panels with steel and concrete to build high-rise towers with a significantly reduced carbon footprint. If completed, it would also become the tallest building in Toronto.

CLT panels are 2×6 or 2×4 pieces of wood which are cross-laminated in a stack to become one solid piece of wood.

“We’re trying to maximize the overall use of sustainably harvested wood by volume to store carbon and reduce embodied carbon in buildings,” said Craig Applegath, a founding partner at DIALOG. “So that meant doing it in a high-rise right now. Everyone’s racing, have the tallest all-wood building, (but) what is this religious nonsense about all wood?

“You’re still using steel connectors. When is it pure enough?”

Since 70 per cent of all the building materials in a high-rise are in the floor system, Applegath and DIALOG realized they could start there.

Its proponents say the system will allow for a 40-foot (or 12-metre) column-free span, where standard CLT design systems currently span nine metres. DIALOG accomplished this by cutting trenches in its CLT panels to fill the core with concrete, so the concrete surrounds the steel rods forming a “diagrid” pattern to reinforce the panel and allow for the longer span of three metres by 12 metres.

The potential impact of the patent

The firm’s paper on the concept argues against the use of an all-wood tower since “wood becomes a more inefficient structural material at greater heights, which is why hybrid solutions are more common in taller buildings. Further, tall, all-wood mass timber structures require an uneconomical volume of wood to replicate the structural capacities of steel and concrete, which limits its use in tall buildings.”

A separate paper from the Council on Tall Buildings and Urban Habitat suggested incorporating responsibly sourced CLT composite decks with glulam beams could reduce embodied carbon by 73 per cent in a 26-storey building – the composite deck alone would deliver a 68 per cent reduction.

DIALOG has been working on the patent since 2018. Beyond its Hybrid Timber Tower design concept, the firm hopes to “use the patent everywhere,” according to Applegath.

“Not necessarily in a tall building, it could be applied anywhere in any commercial space,” said Thomas Wu, structural engineer and partner with DIALOG. “Whether you’re in Toronto or Vancouver or New York or Singapore, that will be ideal for us. And the idea is to promote the use of wood and try to break out of its limitations.”

Applegath also remarked positively on the partnership with EllisDon for the self-funded project.

Currently, the tallest mass-timber building, the 18-storey Mjøstårnet in Brumendal, Norway, incorporates 2,600 cubic metres of timber. The HFTS prototype would have more than 36,649 cubic metres. One cubic metre of wood product can potentially store up to 1.9 equivalent tons of carbon dioxide.

According to a 2017 UN Environment Programme report, embodied carbon, or the carbon footprint of a building before it becomes operational, is responsible for 28 per cent of building sector emissions and 11 per cent of total annual greenhouse emissions.

Formed in 1960, DIALOG now has four studios in Canada and one in the U.S.

Mass timber key to sustainable construction, but not whole story

5 ways Canada’s builders can boost sustainability in a hurry