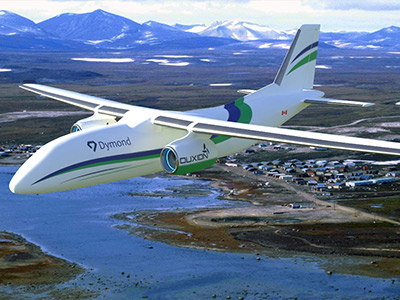 St. John’s-based Duxion Motors Inc. says its patented zero-GHG-emission eJet motors will soon take to the skies, in a fleet of unmanned cargo jets to be operated by Dymond Aerospace Inc.

The memorandum of understanding (MOU) between the two companies was announced today and claims to involve 100 aircraft. It states Duxion will supply 20 eJet motors per year for 10 years, starting in 2026, for a total purchase of 200 engines valued at $500 million.

Each of the Dymond aircraft is to have two eJet motors installed, powered by hydrogen fuel cells.

Dymond Aerospace is part of the Dymond Group of Companies, headquartered in Ottawa, that is also involved in cybersecurity, intelligence and risk management service.

However, many details surrounding development of the jets remains shrouded in secrecy.

“Dymond Aerospace is a terrific partner for Duxion as we share a passion for electrifying the aviation sector with complimentary product offerings,” said Rick Pilgrim, chairman and CEO of Duxion in the announcement. “Our eJet motor technology is a perfect fit for Dymond’s unmanned cargo aircraft with our patented technology providing best-in-class thrust-to-weight ratios as well as a low total cost of ownership which is achieved by having relatively few moving parts, high reliability, and accordingly reduced maintenance expenses.”

To integrate and install the eJet motors, Duxion says it will utilize a 70,000-square-foot hangar space at the Stephenville Dymond International Airport in Stephenville, Nfld. The airport in the small community on Newfoundland’s southwestern coast – which has largely been unused during the past couple of years after losing its scheduled airline service – was acquired earlier this year by Dymond.

Duxion says the space is large enough to also accommodate retrofits for other aircraft, outside of the Dymond partnership.

Duxion says the engines will be capable of producing over 8,000 pounds of thrust — comparable to similar aircraft engines – with zero GHG emissions and a 90 per cent reduction in maintenance costs.

It is not immediately known how far along Duxion is with the development of the engines, nor is any other information about Dymond’s planned unmanned cargo jet fleet included in the announcement.

A CBC News article published in February says the planes would be 117 feet wide, 80 feet long and carry 52,000 pounds of cargo. Dymond Group of Companies’ Carl Dymond, who admits to being “secretive” about the company’s operations, also said the drones do not yet exist but he expects them to be flying by 2025.

Sustainablebiz.ca has requested an interview with Duxion officials to obtain more information.

A release by the Newfoundland and Labrador government in 2021 states the company is involved in the “aerospace and defence industry.” The province is one of several government and private sector investors in the company.

The engine is a permanent magnet motor designed to be used in electric aircraft and “emerging transportation systems.” The motors can also be incorporated as a hybrid-electric installation.

Pilgrim came onboard at Duxion in May, 2020 after being the leader of drilling technology startup, QuickSilver Technologies LLC.

In February, the company appointed Jon Baksht as an independent director to its board. Baksht’s most recent title had been as the executive vice-president and CFO of Valaris — the world’s largest offshore drilling contractor.

In April, 2020 the company began work on a ground prototype model of its eJet. This project has been jointly funded by Duxion, Newfoundland and Labrador’s Innovation and Business Investment Corporation, the National Research Council of Canada and the Atlantic Canada Opportunities Agency.

In the same statement on the MOU, Pilgrim added, “With our ground prototype expected to be completed this fall, we look forward to a long and successful partnership.”

Duxion is also developing Turboprop, an electric motor for propeller-driven aircraft, as well as two electric motors for vertical take-off and landing aircraft — those that don’t require a runway.

Nicholas Sokic Transportation EV International Aug. 30 2022
Nicholas Sokic Business reporter
Nicholas Sokic is a freelance, Toronto-based journalist. He has covered a number of sectors, including business, finance, crypto, health, cannabis and culture. He graduated from Western University's Master of Media in Journalism and Communications program in 2019.