When developer Don Redden was asked about buying piece of land in Kelowna that had been permitted to build a self-storage building, he thought: “Why on Earth would I want to do that?” 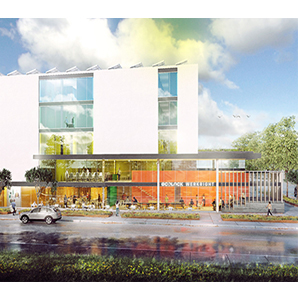 After a bit of research, though, the CEO of Vancouver-based Ulmus Development changed his mind and indeed bought the downtown property at Ellis St. and Bay Ave.

In the next six to eight weeks, construction will begin on EcoLock Kelowna. It’s a project which will blend self-storage with co-working office space in what will be one of the most environmentally friendly buildings in North America.

Redden’s team focuses most of its work on high-rise residential projects, but became intrigued by the possibility of doing something out-of-the-box in Kelowna.

The self-storage business has been around for about six decades and now covers 2.5 billion square feet in North America, he said.

“Most of it is unsightly,” he said. “It doesn’t add to the neighbourhood. It’s sort of symptom of Western consumption that you now need to store your stuff.”

Redden wanted to make a statement with the building, so he teamed up with famed green-building designer Jason McLennan, who designed the cutting-edge concept. On Sept. 25th, they held a launch event for the privately financed project at the Kelowna site.

EcoLock Kelowna will be a five-storey, 112,000-square-foot self-storage and co-working office facility which will generate 105 per cent of its electricity through the use of on-site solar panels. The building will not be connected to the natural gas grid.

The interior of the building’s walls will sequester carbon using Just BioFiber blocks made in Canada from waste hemp stalk. Each of the blocks can store 6.5 kilograms of carbon, the developers say.

The blocks would also replace a large amount of steel and concrete from the structure. EcoLock Kelowna will be one of the largest building-specific ‘sinks’ of sequestered atmospheric CO2 in the world.

The building will also collect, filter and reuse rainwater in a 62,000-litre tank, located under the building.

The building is a “deep green design,” said McLennan, who is the founder of the Seattle-based design and architecture firm McLennan Design.

“The project is going to be net positive for energy,” said McLennan, who is also the founder of the Living Building Challenge. “It will actually generate more energy on an annual basis than it uses — which is pretty cool — all with solar renewable energy in Kelowna on-site on the building’s roof.”

He said the project marries two hot trends in the real estate industry: co-working and self-storage — but for once, a self-storage building won’t be ugly, he said.

“This project is innovative because it’s taking a look at services that we do need in our urban environments, but reinventing it so it’s a better experience,” he told RENX. “It’s a more sustainable experience, but a better customer experience and hopefully (it) can change the way people store their things.”

Apart from the sustainable design, the various components of the building should feel and be used the same as others on the market, McLennan said.

“They (tenants) won’t notice any difference in that way, and that’s part of the goal,” he said. “On one hand, it’s just a great experience, period, but the fact is that behind the scenes, you’re not having a big carbon footprint when you’re using the facility.”

McLennan said the fact it’s a storage building attracted him to the project.

“I like that it’s a very practical building type that’s going for it with sustainability,” he said. “It’s not a university building or an environmental centre; it’s an everyday-type building that is showing that you can go solar and you can do this.”

The building will seek certification through the Living Building Challenge, a certification process which designates buildings as being healthy, self-sufficient, beautiful and contribute more energy than they consume.

EcoLock is also one of 16 projects selected for the Zero Carbon Building Pilot Project.

“What they’re trying to do with the pilot is learn from an approval standpoint where the difficulties are for developers and work with municipalities and other levels of government to streamline it so it can be duplicated,” Redden said.

So far, the additional design costs have been nominal, he said.

“Certainly, we’ll save significant money in operational costs each year,” he said, adding they expect the deep green concept will also differentiate the building in the market.

They hope to eventually expand the concept to other cities around North America, he said. “That’s our real goal. For sustainability to be meaningful and to address climate change, all developers need to scale.”