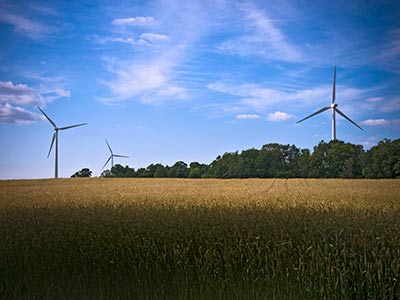 Capstone Infrastructure Corp. has inked a 78 MW renewable attributes purchase agreement (RAPA) with the City of Edmonton for over 20 years, to be supplied by its 192 MW Wild Rose 2 Wind Farm.

It is the largest long-term procurement of renewable energy attributes by a Canadian city to date.

Construction of the $360-million facility is to begin later this year in Cypress County, about 35 km southeast of Medicine Hat, Alta. According to a release, it will generate 200 person-years of employment during construction and offset approximately 340,000 metric tonnes of CO2e (carbon dioxide equivalent) annually when commercial operation begins.

In May, Toronto-based Capstone (CSE-PR-A-T) announced a power purchase agreement (PPA) with Pembina Pipeline Corporation for the offtake of 105 MW over 15 years from the wind farm.

“When we pursue a project of nearly 200 megawatts, it allows us to offer significant value to those buyers, both in terms of securing their future emissions offsets and as a hedge against future, potentially rising power prices,” said David Eva, Capstone’s CEO. “We hope, at least, (it’s) a win for everybody.”

According to Eva this will be the company’s largest project to date. Capstone’s portfolio includes approximately 776 MW of installed capacity across 30 facilities — 29 of which he states are renewable — including wind, solar, hydro, biomass and natural gas cogeneration power plants.

The project’s assets are held by Wild Rose 2 Wind LP, a subsidiary of Capstone.

Capstone had been working on this wind farm project since 2017, and completed the site acquisition in 2019. The agreements with Edmonton and the Calgary-based Pembina (PPL-T) means power production from the farm is fully contracted.

The Edmonton RAPA falls under the city’s Community Energy Transition Strategy, approved in April 2021, which commits to having its corporate operations be carbon-neutral by 2040. The city as a whole is to achieve net-zero greenhouse gas emissions by 2050.

“We have been huge supporters of the Alberta power market. It really is the best market in Canada to allow for these bilateral agreements between companies like ours, delivering zero-carbon energy, with organizations looking to decarbonize,” Eva said.

“It’s just so fantastic that the City of Edmonton took that same leadership position as a municipality . . . We applaud their vision and their efforts.”

The province of Alberta has committed achieving a net-zero electricity sector by 2035.

A release on the RAPA notes Cypress County’s high wind resource as a primary reason for it being the site of the wind farm. Eva also mentioned its flat, cultivated farmland, low population density and access to the grid as other factors.

As for how the parties got involved in the wind farm, it came down to their respective interests.

“These are just cases where, I just think, we had an excellent project that was available for construction next year, at a time where there was there was interest from those parties,” Eva said. “We’re just really pleased that everything lined up the way it did.”

Last April, Capstone completed its largest solar project and the largest solar project in Canada at the time — the Claresholm Solar Project in Willow Creek, Alta. with 132 MW of alternating current (MWac). The majority of the project’s power was sold to Calgary-based TC Energy Corp. under a PPA, with the rest being sold into Alberta’s wholesale power pool.

Looking ahead, the company currently has two solar projects in development — the Michichi Project in Starland County, Alta. and the Kneehill Solar Project in Kneehill County, Alta. Both projects are 25 MWac and were purchased from Samsung Renewables in March 2021.

“One announcement is to be celebrated and its execution and success has to be ensured. But the job doesn’t stop there,” Eva said. “We know this country still has a long way to go to meet its its decarbonization targets and we feel really fortunate to be in a position to help that along and play our part.”

Nicholas Sokic Energy Mitrex Ontario Jun. 15 2022
Nicholas Sokic Business reporter
Nicholas Sokic is a freelance, Toronto-based journalist. He has covered a number of sectors, including business, finance, crypto, health, cannabis and culture. He graduated from Western University's Master of Media in Journalism and Communications program in 2019.