This week’s ESG Report takes to the skies with Air Canada, then returns to the ground with Crown... 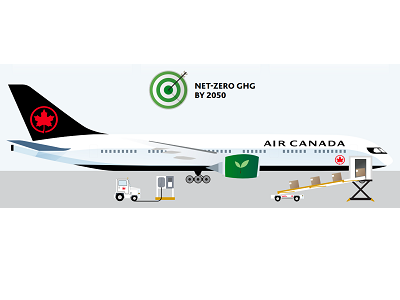 This week’s ESG Report takes to the skies with Air Canada, then returns to the ground with Crown corporation Ontario Power Generation (OPG) and real estate giant CBRE Group.

Report highlights: Air Canada has committed to invest $50 million in sustainable air fuels and other low carbon aviation fuel development by 2030. It is actively evaluating the practical applications of renewable energy sources such as biogas and renewable electricity, and energy transition measures.

Emissions goal: A 2030 target for air operations of 20 per cent net greenhouse gas (GHG) reduction, and a 30 per cent net GHG reduction from ground operations, using 2019 as a baseline. Net-zero by 2050.

Third-party verifiers: IEnvA and PricewaterhouseCoopers LLP for limited assurance engagement on certain indicators, including the Scope 1 and Scope 2 emissions.

ESG strategy: A $50 million investment into sustainable air fuels, carbon reduction and capture development. Electrifying its ground equipment to decarbonize. Air Canada will evaluate the viability, safety and performance of new electric, hydrogen or hybrid operational technologies, and will look for other innovative opportunities elsewhere in its operations.

OPG is a Crown corporation that produces approximately half of Ontario’s energy. It generates energy from nuclear, hydroelectric, wind, oil, natural gas and biomass sources.

Report highlights: Advanced several clean energy projects, including the redevelopment of the Calabogie hydro station and the replacement of two previously decommissioned units at its flagship Sir Adam Beck I Generating Station. Hydrogen production also progressed under its subsidiary, Atura Power, through the advancement of commercial low-carbon hydrogen demonstration projects at a variety of locations across Ontario.

Expanded the Ivy Charging Network, in partnership with Hydro One, which is to develop into an electric vehicle charging network with more than 150 fast chargers, at more than 60 sites, by the end of 2022.

OPG has recently engaged EcoVadis to conduct ESG evaluations throughout its value chain. This work will help determine a baseline for Scope 3 emissions.

CBRE Group is a commercial real estate services and investment firm based in Dallas with over 7 billion square feet of managed property and over 100,000 employees. It has over 500 offices in over 100 countries, including Canada.

ESG strategy: Attaining 100 per cent renewable electricity by the end of 2025. An all-electric fleet by 2035. Enforcing a sustainable procurement code.

Tyler Choi ESG ESG Report National Aug. 17 2022
Tyler Choi Business editor, Sustainable Biz Canada
Tyler Choi is a journalist based in the Toronto area. He has covered a wide range of sectors ranging from science and technology, the environment, business, government policy and crime, to finance. Among the many people he has interviewed, his favourite was an Ig Nobel Prize winner.