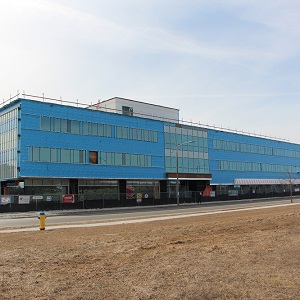 “We’ve been developing sustainably for over a decade,” The Cora Group chief operating officer Adrian Conrad said of his Waterloo-based development and property management company. “The vision was to push the limits of what could be done and disrupt the industry.”

Evolv1 is one of 16 projects across Canada to be selected by the CaGBC to participate in a two-year pilot of its new Zero Carbon Building Standard.

Evolv1’s performance will be monitored during its first 12 months of operation to see if it achieves a zero-emissions balance in order to earn a Zero Carbon Building – Performance certification.

“If hydro rates double in five or 10 years, we’re insulated from that,” said Conrad.

The 100,000-square-foot, class-A evolv1 is located at 420 Wes Graham Way in the David Johnston Research + Technology Park, within Waterloo’s Idea Quarter tech hub. It will include a coffee shop, creative collision spaces, a public event space and a fitness centre. The location is close to the University of Waterloo, Wilfrid Laurier University, restaurants, walking trails and a future public park.

Evolv1 is located 80 metres from the new R+T Park light rail transit stop and connected to other locations by bus. It will have four parking spots per 1,000 square feet, electric vehicle charging stations, bicycle racks, and showers.

Construction started in May 2017 and evolv1 should be ready for occupancy by late summer or early fall.

Evolv1 is about 90 percent leased. EY will have most of the third floor and Waterloo technology company TextNow will take the entire second floor. An innovation space called evolvGreen will house a community of local startups, government officials, academic institutions and industry partners committed to supporting a sustainable economy and workplace wellness.

“There will be some startup companies in there and lots of research being done,” said Conrad. “While Cora Group is a private company, we’re partnering with these companies to study what we’re doing at a high level.

“There’s a lot of information on the market that’s qualitative around the benefits of sustainable building. We want quantitative information.”

The Cora Group is starting the site plan for evolv2 located across the street, a slightly larger building at close to 140,000 square feet. It will also be designed to Zero Carbon Building – Design and LEED Platinum standards. Late 2019 occupancy is the goal.

“With the next building, I want to learn how to pursue zero carbon more efficiently, more cost-effectively, and quicker,” said Conrad.

Conrad said both evolv1 and evolv2’s lease rates will be in the same range as other new buildings in the market. The Cora Group has a proprietary model that mitigates paying a significant premium to build a zero carbon building.

The Cora Group previously built the Accelerator Building and the LEED Gold-certified innoTECH Building and Cora Building in the David Johnston Research + Technology Park. There was a focus on sustainability with all of them.

The Zero Carbon Building Standard can be used by new and existing commercial, institutional and multi-family buildings. It’s the first standard in North America to use carbon instead of energy efficiency to measure a building’s impact.

Mark Hutchinson, CaGBC vice-president of green building programs, explained some of the other 15 pilot projects are fairly advanced while others are at very early design stages.

A target date of 2050 has been set to eliminate carbon emissions from all sources. While there are sectors of the economy where that’s not likely to be feasible, it is attainable with buildings.

“If we don’t start building those buildings that we’ll want in 2050 today, then we’re going to find ourselves in 2050 with a bunch of buildings that need massive investments in retrofits,” said Hutchinson.

“It’s much more cost-effective to invest at the front end than it is later on in retrofits.”