When the Montreal borough of St-Laurent asked grocer Richard Duchemin to install a green roof on top of half of his new IGA grocery, he decided to take things a step further – he installed a 25,000 square foot urban farm above his store. 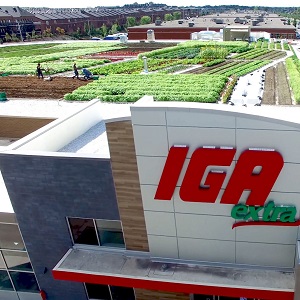 His urban rooftop farm is believed to be the first of its kind for a Canadian grocer.

Duchemin, co-owner of the IGA Extra Famille Duchemin (part of Sobeys), is among the growing number of Quebec property owners who are going green – at least when it comes to rooftops.

“Fifty per cent of the roof had to be green,” says Duchemin of the city requirement for his 52,000 square foot grocery that opened last year after operating at a smaller locale nearby since 1984. “We decided to take that not as a constraint but as an opportunity and to push the project further by growing vegetables on the roof.”

According to a newly released survey by Green Roofs for Healthy Cities, the North American green roof and wall industry association, Montreal and Quebec are among the top ten of North American cities when it comes to green roof installations.

Toronto leads the way in the 2016 Annual Green Roof Industry Survey, while Montreal places sixth and Quebec City tenth. Vancouver, in ninth spot, rounds out the Canadian cities in the top ten.

It’s not surprising that Toronto is tops in green roofs:  In 2010, the city passed a first-of-its-kind Green Roof Bylaw in North America that required new commercial, institutional and multi-family residential developments to cover between 20 and 60 per cent of their buildings with vegetation.

Cities like Montreal and Quebec City lack concrete bylaws requiring green roofs and “we do not have any policies to help people really install green roofs,” says Patrice Godin, vice-president and co-founder of La Ligne Verte (The Green Line), a Montreal-based company that specializes in installing green roofs and walls. (It installed and manages the rooftop farm at the IGA.)

“There’s no funding from local governments,” in Quebec, Godin says. “There’s really no incentives for the general population to install green roofs, so in most of the projects they do it because they want to.”

However, St-Laurent stands as an exception. The borough is heavily industrial and “is really sensitive” to the issue of urban heat islands in the city. It “has become a leader in asking businesses to install green roofs and to densify the amount of trees and canopy at ground level.”

Some Quebec cities attach requirements for LEED environmental certifications to new projects and “one way to get it is to install green roofs. So we see a lot more green roofs on institutional buildings,” Godin says.

He says if formal economic and political incentives were put in place in Montreal and Quebec City for green roofs, their numbers would multiply.

It has paid off for the IGA

Back at the IGA, Duchemin says the decision to install a rooftop farm has paid off. The plants are irrigated with water from the store’s dehumidification system. Meanwhile, the green rooftop reduces heat islands and improves bio-diversity – earlier last spring, rooftop farmers found a nest of killdeers (medium-sized plovers).

Duchemin says customers were increasingly asking the store to sell local produce and “you can’t get much more local than what we’re doing now with vegetables growing 20 feet above our heads that we harvest every day.”

Construction of the urban farm was finalized in May 2016 and La Ligne Verte started testing produce in the six-inch-deep soil system. (La Ligne Verte rents the space from IGA, manages the harvest and sells it to the store.)

The certified organic produce sells in-store at the same price as other Quebec organic fare and is selling very well, Duchemin says. It’s sold branded with the name Frais du toit (fresh from the roof).

As a plus, produce above the store is grown until it’s ripe. “There’s not going to be a single green tomato that’s sold downstairs,” Godin says. On average, the produce lasts a week or two longer than produce that comes from abroad.

In addition, there are eight rooftop bee hives, managed by urban beekeeper Alvéole, and the honey produced will be sold in-store.

Public tours of the rooftop farm are slated to begin soon.

“I only see advantages at the moment,” says Duchemin of his productive green roof.  “I hope that we’re giving an example to other merchants to do the same thing.”