Ag-tech company HydroGreen, whose technology can grow feedstocks with just five per cent of the w... 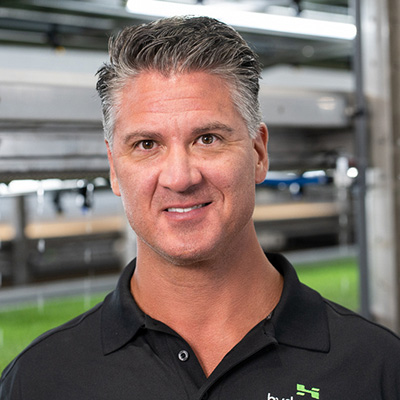 Ag-tech company HydroGreen, whose technology can grow feedstocks with just five per cent of the water required by traditional farming practices, was recognized as one of five finalists in the New Economy category at the 2022 South by Southwest (SXSW) Awards.

The company, a division of Metro Vancouver-based CubicFarm Systems Corp., markets a system known as Automated Vertical Pastures (AVP). It comes in two sizes, smaller for herds of around 100 heads and larger for over 100. Smaller AVPs were previously known as DGS 66 because they have six growing levels, and the larger models were known as GLS 808, thanks to their eight growing levels.

In addition to the significant water savings, a dozen of the larger commercial-scale modular AVPs (about 10 feet tall, 50 feet long and 8 feet across) would replace 500 acres of farm land, the equivalent of 378 football fields.

The AVP performs all growing functions, including feeding, watering, lighting, harvesting and re-seeding, all fully automated. It can deliver livestock feed without the traditional investments in fertilizer, chemicals, fuel, field equipment and transportation.

The system is modular and scalable, growing from seed to feed in six days in any climate.

HydroGreen president Dan Schmidt explained the technology was largely motivated by increasing droughts across North America. One of the benefits of the AVP, for smaller farmers, in particular, is the ability to grow more with less.

Without access to the amount of water, they need to grow the feed, many of what he calls the “generational ranchers” have no choice but to sell their land.

“They’re very aware of the natural resource limits in their footprint. So either they have to acquire more land to grow, or acquire more water, or acquire more inputs,” Schmidt said. “That’s really unique about this product: we can scale it. It’s such a large volume, and it significantly impacts operations.”

A corresponding increase in wildfires is also restricting free-ranging herds in states like Utah, Colorado, Idaho, and Wyoming. This further increases the demand for efficiently grown feedstocks.

HydroGreen also has a seed scientist on staff who has been testing hundreds of North American seed varieties to recommend to farmers and ranchers in many different regions.

The AVP is a simple setup, which Schmidt describes as akin to a conveyor belt on which the seeds sit. The mat is almost an inch thick, and the sources create their root beds and grow together over those six days. Water is sprayed on the seeds for “about an hour” each day. The largest of the AVPs could have up to 35,000 pounds of feed on them at one time.

“People are always amazed. They ask, ‘where’s the soil’ or ‘what are you putting on the seed?’ ” Schmidt said. “It’s nothing. There’s nothing except for clean seed, clean air, clean water. That’s it, and all the energy and nutrition is actually in the seed itself.”

He also mentioned several pending patents involving the control of what he calls the “recipe” of the seed. The nutrient load can be altered by adjusting the water, light, and other environmental factors. More nutrients in the grain, in turn, mean better herd health.

HydroGreen plans to expand outside North America in about 18 months, once it has more experience scaling up the system.

“It will work very well in Europe; it will work and scale well in the Middle East and Asia, anywhere where water is a concern,” Schmidt said. “Our systems are the same everywhere in the world. We have to adapt to the system’s location, meaning Wyoming’s ambient temperature in January will differ from Arizona, right?”

“It’s heartbreaking to see the devastation of climate change and long supply chain disruptions that are impacting so many farms and ranches across North America and the world,” Dave Dinesen, the CEO of CubicFarms, said in a statement after the finalists were announced.

“As one of only two Canadian companies recognized this year at SXSW, we’re proud to share our impactful and innovative AVP technology with an international audience.”

The other Canadian finalist was the virtual reality company Infinite, based in Montreal.

HydroGreen, based in Sioux Falls, South Dakota, was purchased by CubicFarms at the end of 2019, becoming a wholly-owned subsidiary.

CubicFarm is headquartered in Langley, B.C. CubicFarms appointed Daniel Burns as its new chief financial officer this month in other corporate news.

Founded in 2015, the company also operates a facility in Pitt Meadows, B.C., and sells products in the province to retail and wholesale customers under the brand Thriiv Local Garden.