Invert Inc. has launched a self-titled app which will allow individual consumers to calculate and... 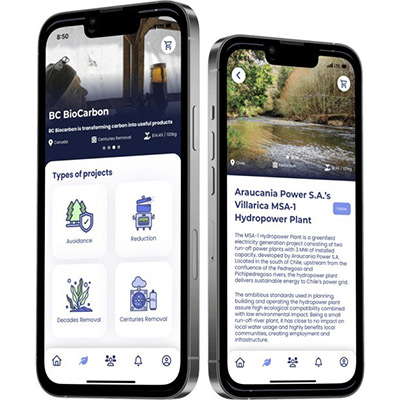 Invert Inc. has launched a self-titled app which will allow individual consumers to calculate and monitor their own carbon footprints and to assist in reducing their climate impact.

Individual footprints can be measured against weekly and monthly goals — complete with virtual badges as rewards — or compared to a provincial average.

Users are also able to purchase verified carbon credits, or gift them to other users, from companies and projects with which Invert has deals.

“We looked at a number of studies and found three-out-of-four people believe that climate change will have an impact on their individual life and want to take action on climate change,” said Rade Kovacevic, Invert’s co-CEO.

“But when you interview folks, what you often find out is they don’t know how to – it feels overwhelming and all-encompassing – and they have difficulty finding tangible ways to have an impact.”

The company wanted “a way to bring people into the conversation, build overall awareness and then share the action to create some level of scale through all of us working together and having a meaningful impact on climate change.”

The app is known as “Invert: Carbon Neutral Society” for both Android and iOS.

Work on the app began about nine months ago with Invert’s in-house software team, along with third-party partners to increase bandwidth and development speed.

As Kovacevic explained, a user’s goals can shift at will. A user can attempt anything from carbon neutrality to reducing their impact by 300 kg of carbon emissions per month. Badges can be awarded based on hitting those goals, or contributing to carbon removal or reduction projects.

“We want people to be proud of the action they’re taking,” Kovacevic said. “We’re moving people away from Twitter doom-scrolling and more towards more tangible things we can do in our lives and take action together to improve the world.”

At the moment, the app is targeted to Canada as a result of the “fair amount of back-end work” involved in measuring carbon footprints on a province-by-province basis due to different power grids.

Kovacevic said part of helping to fund carbon credit and carbon removal projects means providing an avenue for individuals to get involved, in addition to larger companies.

The company plans to update and expand the app and its reach on a regular basis – possibly as often as every few weeks. More substantive updates could include expansions to other countries or other means of sharing carbon footprint information. Some of those more intensive features are expected to be rolled out by the end of this year.

The app currently links to nine projects that offer carbon credits, including:

– CarbonCure Technologies, based in Halifax;

– the Conservation Coast project in Guatemala;

Kovacevic said another two projects will be available in the coming weeks.

Credits are available in four categories: avoidance, reduction, decades removal and centuries removal. For an ‘avoidance’ credit, Kovacevic said it could be protecting a forest from logging such as the Conservation Coast project.

One example of a reduction carbon credit is a cookstove project in rural Zambia, one of the latest additions to the app. As opposed to an open-pit fire, manufactured cookstoves will be provided, reducing the need for lumber and providing more efficient heating of food.

In April, CarbonCure — which mineralizes and permanently stores CO2 in concrete — netted a $38-million carbon credit purchase in a 10-year agreement with Invert and crypto solutions provider Ripple Inc.

Invert’s deal with BC Biocarbon, headquartered in McBride, B.C., was the most recent. The credits, verified by Puro.earth, will be derived from biochar produced from Biocarbon’s proprietary biorefinery in Robson Valley. Each credit represents a metric tonne of CO2.

While inclusion on the app wasn’t necessarily an initial part of each agreement, he said the companies involved were receptive to the idea.

“I think that transparency and consumer understanding of how carbon credits are created, and the other knock-on benefits that these projects have, are incredibly important in terms of building trust with the broader population around the voluntary carbon market,” he said.