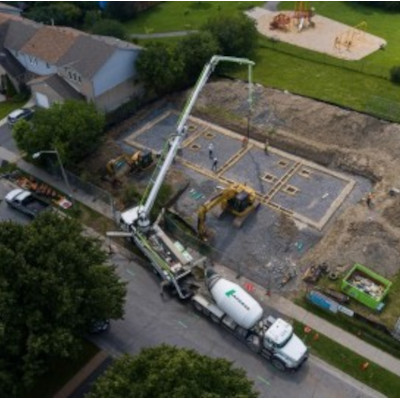 Lafarge’s Kingston plant has produced and delivered the first ECOPact Zero-carbon concrete in Eastern Canada. It was also the first time the company used ECOPlanet cement in the mix.

While cement represents only 11 per cent of a concrete mix, it accounts for more than 80 per cent of all energy required to produce concrete.

The production and application of cement — one of the main ingredients in concrete — causes seven per cent of global carbon dioxide emissions, more than the total emissions from all of the trucks in the world.

Concrete is the second-most-consumed material in the world (behind only water), amounting to three tonnes per year for every person. Twice as much concrete is used in construction as all other building materials combined, and it can be very carbon-intensive to produce.

Lafarge contributes to lowering the industry’s carbon footprint by decarbonizing its production process, led by the use of alternative fuels.

The product will be employed to construct a fourplex in Kingston, Ont., for Habitat for Humanity. Lafarge is donating concrete for the site.

“We are very excited and grateful for the partnership we have with Lafarge,” said Deb Wilson, director of construction, Habitat for Humanity, Kingston Limestone Region, in a release.

“As we strive to design and build our homes with more energy efficient elements and sustainable products, it is a perfect opportunity for us to have Lafarge generously donate its ECOPact Zero-carbon concrete mix for this project.”

The company introduced its ECOPlanet ultra-low-carbon cement in May 2021. EcoPlanet incorporates low-emission raw materials and is the world’s first cement consisting of 20 per cent recycled construction and demolition waste.

“We have already made great strides in reducing our carbon footprint in an effort to meet our goal of more than a 20 per cent reduction in carbon intensity by 2030,” said Rene Thibault, Lafarge’s head of North America, in a release.

“Last year, we introduced EcoPact, our line of low-carbon concrete, and the introduction of EcoPlanet provides yet another sustainable solution for our customers and communities.”

ECOPlanet cement leads to less than half the kgCO2/metric tonne emissions produced by regular Portland cement.

“The strength profile is the same as traditional Portland cement,” said Brad Kohl, president and CEO of Western Canada in a release. “But we’ve decreased CO2 emissions from the manufacturing process by 35 per cent.”

EcoPlanet is the global brand applied to low-carbon cements which reduce CO2 per tonne greater than 30 per cent, emitting no more than 400 kgs of CO2/tonne. Standard Portland cements emit upwards of 900 kgs of CO2/tonne and is the second largest global generator of CO2 emissions.

In Seattle, Washington, a mix of EcoPlanet cement and slag reduced emissions by 62 per cent.

“ECOPlanet is emblematic of how we are committed to building a net-zero future,” said Magali Anderson, chief sustainability and innovation officer, Holcim, in a release. “It is innovation-driven, pushing the boundaries of low-emission materials such as calcined clay. It is circular, using recycled materials to preserve nature.

“ECOPlanet is a great demonstration that it is possible to build low-carbon around the world, from Germany to Canada, with no compromise in performance.”

Lafarge has also partnered with Batica to construct a low-carbon “House of Tomorrow” in Saint-Caprais-de-Bordeaux, Gironde in France. Construction began at the end of October 2020 and incorporates the latest innovations developed by the group’s global research and development centre in Lyon.

ECOPlanet material used for the House of Tomorrow recorded a CO2 footprint more than 40 per cent lower than a traditional house, along with an optimized energy performance. The property remained financially accessible to buyers due to the integration of these innovations and controlled costs.

CarbonCure is another Canadian company leading the way when it comes to sustainable construction materials. The company enables the concrete industry to improve operations while reducing its carbon footprint.

Cache Creek, British Columbia-based Progressive Planet Solutions Inc. is also entering the ring by researching and developing a project to optimize PozGlass SCM, which aims to further the company’s path to commercialization of economic and eco-friendly cement powders to replace Portland cement and fly ash.

“It is exciting that our early efforts to permanently sequester carbon dioxide in glass have been successful,” said Steve Harpur, CEO, Progressive Planet Solutions, in a release. “It is our continued intention to rapidly commercialize PozGlass SCM as a substitute for a significant portion of Portland cement and fly ash used concrete mixes with PozGlass SCM possessing a fraction of the carbon footprint of both Portland cement and fly ash.”

Lafarge says it is Canada’s largest provider of sustainable construction materials and has 400 sites across Canada. The company is a member of Holcim, a global leader in sustainable building solutions. The company operates across 70 markets and four business segments, including cement, ready-mix concrete, aggregates, solutions and products.

Holcim’s green building solutions are aligned with sustainable building certifications from BREEAM to LEED.  The company aims to double its market presence by the end of 2022 to enable low-carbon construction at scale.