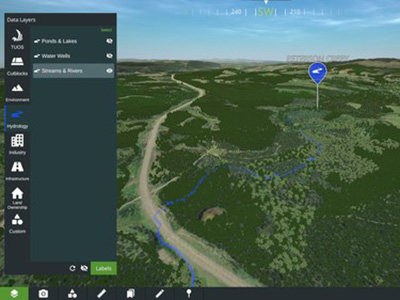 Designed to help First Nations with forest fire prevention via the mapping of underbrush and carbon credit mapping, it will also provide cultural data to preserve sacred sites and other important areas.

At least 15 First Nations are already using the software across Canada to take landscape-level data — previously pulled from Google Earth — satellite imaging and physical maps to turn them into a 1:1, 3D digital twin that future generations can easily recall.

The digital twin can be viewed on a Windows OS device, an iOS app for phones and tablets, or any commercially available VR headset.

CEO and co-founder Charles Lavigne was inspired to create Guardian with partner Kevin Oke in 2014 after spending time in the video game industry. The idea is to take the technology most prevalent there, such as real-time 3D visualization and rendering, and apply it to “real-world problems.”

“We eventually found our way working with clients in the natural resource sector. That led us to notice that there there was a gap in, you know, products, services and solutions for First Nations landowners,” said Lavigne. “Oftentimes, when it comes down to use, they have less access to data.”

The platform has been in the works in collaboration with several First Nations for the last 18 months. Following this launch, the plan is to release multiple case studies with participating First Nations to prove the platform’s accessibility.

“It’s gonna come down to, how can we scale it and make it more and more accessible? There’s over 500 First Nations in Canada, over 200 in B.C. alone,” Lavigne said. “Some have more capacity and resources and some don’t.”

The data preservation element of Guardian is a mix of satellite imagery and industry-driven data acquisition from drones to aerial, geological and LiDAR remote sensing (light detection and ranging), to name a few.

Most important, though, is the cultural and historical knowledge integrated into the digital twin, typically given from Elders in the specific community.

That information is not shared with any other First Nation unless they have a data-sharing agreement. The cultural aspect of the tool is provided solely to the First Nations, run through their lands management or cultural offices. It can include video or audio clips, photos, narrated stories or even digitally repatriated artifacts.

Contributing to the wildfire mitigation component of the application is open to anyone with access to the platform. All that’s required is to take a picture of the underbrush on a tablet or smartphone; then, it is geotagged and sent to LlamaZOO’s servers. It’s run through an algorithm against broader datasets of the forest, including the tree species, age and canopy, to “triage a risk factor for the forest,” says Lavigne.

Another use is in helping to establish connectivity to remote communities across the country.

“As Rogers and Bell and TELUS start rolling out more rural and remote connectivity, where are these pieces of infrastructure being placed?” Lavigne asked. “Where the radio towers and fibre lines (are) rolling out all have relevance in terms of environmental sensitivity and cultural sensitivity as well.”

The goal is to help facilitate proceedings from telecommunications companies, governments and First Nations communities by showing all the necessary data from the same viewpoint.

“Preserving our culture, land, water sources, and ancestral knowledge is very special to us; this technology supports that preservation while facilitating the meaningful conversation. For our people, it’s also critical in passing this knowledge along to younger generations,” said Robin Billy, the director of operations of the Stk’emlúpsemc te Secwepemc First Nation.

“That has been brought to life using the 3D virtual reality experiences that Guardian can provide. We’re proud to share and deepen the appreciation of traditional knowledge within the community and to explore the additional ways our Nation can maximize this tool.”

While Lavigne said the platform is exclusively for First Nations’ use, he and LlamaZOO discuss use cases with Indigenous groups in Australia, South Africa, and South and Latin America. There are no plans, at this point, to expand into the U.S.

Although headquartered in Victoria, LlamaZOO also has remote workers in Vancouver, with about 40 employees. The spatial intelligence provider also has similar 3D digital twin platforms, MineLife and TimberOps, mapping the environments of those respective industries.