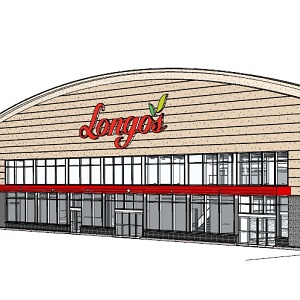 The federal government program contributed $1.44 million to the $11.06 million it’s taken to build the 40,000-square-foot supermarket in Stouffville, Ont., which will use 35 per cent less energy than similar stores and produce 65 per cent of its own energy through renewable technologies.

“Government support at the demonstration phase will lower both the technical and financial risks associated with the construction of high-performing buildings, as we build case studies that provide information on actual return on investment,” said Natural Resources Canada spokesperson Catherine Leroux.

“Until projects of this nature are completed, data on costs and performance are based only on models and theory.”

Supermarkets in Canada have high heating and cooling loads due to the country’s varied climate and geography. This makes reducing greenhouse gas emissions and energy use challenging and makes the new Longo’s store unique. Some net-zero energy supermarkets, in more favourable climates, are also being attempted elsewhere around the world.

The Stouffville Longo’s location aims to set an example for the Canadian supermarket sector. Its goal is to reduce greenhouse gas emissions by between 1,500 and 2,000 metric tonnes per year by integrating energy-efficiency improvements, renewable energy systems, and other sustainable technologies. That number is the equivalent of taking from 274 to 366 cars off the road.

“This project will be able to reduce greenhouse gas emissions through the integration of multiple technologies to reduce losses of refrigerant, recover waste heat from its operation, lower heating and cooling loads, and produce and use clean energy from renewable technologies such as rooftop solar panels, building integrated photovoltaic panels, combined heat and power generation, advanced controls, and other advanced building envelope materials,” said Leroux.

“Annual energy savings are expected from high-efficiency building operations but require higher upfront capital costs. Payback for this type of building is estimated to be between eight and 15 years. Actual savings will be determined once at least one full year of data is obtained.”

Longo’s vice-president of central procurement and facility management Dave Mastroieni said the Stouffville supermarket will cost approximately 30 per cent more to build than a typical store.

“Longo’s has always been looking to improve its building of stores, as well as supporting environmental initiatives,” said Mastroieni.

Neelands Group Limited provided expertise in refrigeration applications and was responsible for providing a novel refrigeration and cooling system. s2e Technologies Inc. designed a building which could achieve near net-zero energy performance, including the selection and integration of renewable energy technologies and other advanced building technologies.

“Projects like this also support innovative Canadian companies to bring innovative clean technologies to market by demonstrating their value in a real-world setting,” said Leroux.

Longo’s was the first Canadian grocery retailer to have a solar energy system tied to the hydropower grid. Mastroieni noted Longo’s has also incorporated: solar elements at seven sites and its head office; LED lighting retrofits and electric vehicle charging stations at several sites; and CO2 refrigerants at 10 sites.

“Projects were selected through a detailed review process which includes technical review by subject matter experts,” said Leroux. “Longo’s conceived of and proposed their project through this competitive call for proposals.”

The 2017 federal budget provided $48.3 million over eight years to the Energy Efficient Buildings Research, Development and Demonstration Program to support innovative projects, including for highly energy-efficient commercial and institutional buildings.

Such projects are considered critical to helping meet the Pan Canadian Framework on Clean Growth and Climate Change objective of reducing greenhouse gas emissions from the built environment by 30 per cent by 2030.