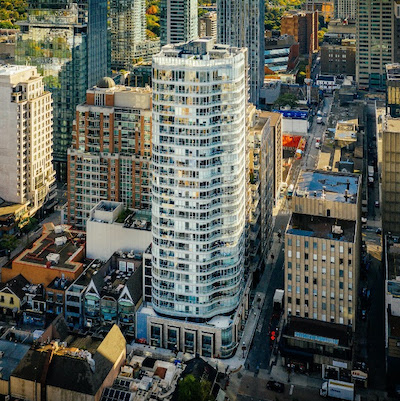 The Minto Yorkville Park condo in Toronto, where the builder has completed a pilot air tightness test to improve energy efficiency at this and other new builds. (Courtesy Minto)

Minto Communities has completed an air tightness pilot project test on its Minto Yorkville Park condominium in Toronto as it seeks to improve the energy efficiency of its buildings.

“Knowing where the City of Toronto is moving the performance requirements of their buildings, we’ve done a fair amount of energy modelling of our buildings at the design stage,” Minto Communities sustainability and innovation director Roya Khaleeli told Sustainable Biz.

“What we’ve seen is the air tightness value that gets plugged into the energy model is one of the variables that makes the most significant difference.”

Minto Communities plans to use the findings from the test, a first for Canadian residential high-rises outside of British Columbia, to establish a baseline measurement for air leakage. The company says it will increase both energy efficiency and the comfort of residents in future projects.

Minto Communities partnered with RDH Building Science to complete the guarded air tightness testing, which involves isolating individual floors and capturing air leakage through the building enclosure. The test floor, along with the floors above and below, were pressurized and depressurized identically throughout the process.

Minto Communities sustainability project coordinator Carl Pawlowski said the test involves pressurizing the interior space by using blower doors, which are essentially large fans, to create negative pressure within a space. This allows the volume of air moving between the interior and exterior to be measured.

The process included advance preparation meetings, making sure all of the preparation work was done properly the day before, and then about seven hours of actual testing.

Pawlowski said the cost of the testing depends on the size of the floor plate and the complexity of its design, but would range from $20,000 to $60,000 per test. Cost efficiencies could be achieved by testing multiple floors simultaneously, and it’s anticipated the cost will come down as capacity increases.

“It’s not realistic to do the entire building at once, so that’s why we take the testing approach where you can do a floor on the bottom, a floor in the middle and a floor on top, and then with any unique conditions you might find elsewhere in the building,” said Pawlowski. “Then you can aggregate those to get an accurate picture of how the entire building will likely perform.”

The testing took place while the 25-storey, 198-suite Minto Yorkville Park project at the corner of Bellair and Cumberland streets was under construction. This allowed the developer to avoid interfering with building occupants.

“Given the length of time it takes to take a project from inception to delivery, we also wanted our construction team to become comfortable with what it took to conduct an air tightness test,” said Khaleeli.

Minto Communities is budgeting to incorporate the testing into every project in the Greater Toronto Area (GTA) currently in the early construction or planning stages.

RDH wants to build capacity to carry out more air tightness testing in the GTA, but its Toronto staff didn’t have experience in the process. An RDH employee was brought in from Seattle, Wash. to train the team and help run this initial test.

Minto Yorkville Park performed extremely well in the testing and met the standards which have been established in Washington state, where air leakage is regulated and standards must be achieved to receive an occupancy permit.

Although air tightness testing in high-rise buildings isn’t common in Ontario, it’s likely to become a regulated measurement in the GTA in the coming years.

“If you don’t know how your buildings perform, and then you have to test and hit a target and you still don’t know, and then you don’t get an occupancy permit, that’s huge. You have to go back through the building forensically and try to fix some of these details. We do not want to be in that situation.”

Minto Communities is a family-owned, fully integrated real estate development, construction and management company with operations in Ottawa, Toronto, Calgary and South Florida. It’s been involved with the design and construction of more than 85,000 residential and commercial properties.

The air tightness testing project was a major reason why Minto Communities and Minto Yorkville Park recently received a 2020 EnerQuality Award in the building innovation category.

The building is constructed with a long list of “green” features, including a green roof to help combat the urban heat island effect and mitigate storm water runoff, along with rainwater harvesting.

Among the other features are: high-efficiency mechanical equipment; water-efficient fixtures and fittings; LED lighting; multi-chute recycling; a garage ventilation exhaust system controlled by carbon monoxide sensors located throughout the underground parking garage; electrical vehicle charging stations; paint, coatings and adhesives with low volatile organic compounds; a cleaning system that uses ozone rather than harsh chemicals and is healthier for people and better for the environment; ENERGY STAR-certified appliances; heat recovery ventilators to improve fresh air circulation; occupancy sensors for lighting in the parking garage and corridors; individual suite meters; and bicycle storage for residents and visitors.

Khaleeli said these measures are part of Minto Communities’ move toward net-zero energy usage in its buildings. The City of Toronto’s green standard has laid out a stepped trajectory toward achieving that goal by 2030.