Atlantic Canada’s first six-storey wood building is currently in the planning stages and will be the first mid-rise project in Dartmouth, Nova Scotia, under its Reinventing Main Street program. 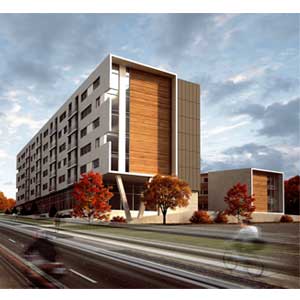 Garden View, as the building is named, will be the first project under the area’s 20-year plan that will transform that section of Dartmouth from a suburban strip mall shopping district into a compact, mixed-use community.

Patrick Crabbe, Project Coordinator at Atlantic WoodWORKS!, and a technical advisor to the project said “In recent years, mid-rise wood construction has been embraced by jurisdictions across Canada for the many advantages it delivers, including lower project costs, shorter construction timelines, and increased sustainability.”

Crabbe called wood the world’s oldest building material and said that it is now at the forefront of production because of the environmental benefits it offers. “Wood is a renewable resource and it stores carbon.”

Thanks to a change in the 2015 national building code, mixed-used wood buildings may now be built to a six-storey height. Crabb said Garden View will be the first building of its kind in Atlantic Canada.

Currently in Atlantic Canada only about five per cent of commercial, institutional and industrial buildings are made from wood. “It’s a very small part of the market,” Crabbe said.

Garden View will consist of two buildings joined by a courtyard. The 72,000 sq. ft. development will have professional offices, retail and possibly a restaurant on the first level.

The second and third floors will offer housing for seniors while family units will round out the top three floors.

“We’re trying to make an all-inclusive mixed-use community well-supported with services in basically the one building,” said Tom Emodi, the building’s architect with Teal Architects in Halifax.

“It is a compact commercial district, with the highest concentration of health and wellness services in Atlantic Canada,” Emodi said.

“This offers us the chance to provide affordable housing for seniors and families that is close to essential services, to sustainably increase population density and limit urban sprawl. It is the first of many such projects we hope will transform the area into a vibrant and integrated multi-generational community.”

Beyond the energy code

The architect noted that the design for the building calls for it to perform well beyond the energy code. That means he’ll be looking for a higher level of performance from the building’s envelope.

As well, Emodi will work with Efficiency Nova Scotia to install a heating and cooling system for Garden View. He couldn’t say what system would be used yet, but speculated that it would likely be a centrally driven heat pump system of some sort.

Another item under consideration for the building is some sort of energy storage system such as solar photo-voltaic or solar thermal, but that’s not been confirmed yet.

The building will also have a landscaped rooftop deck and offer a car sharing program.

Crabbe said that the wood building industry is the only building material industry that has a third-party certified environmental product declaration (EPD). He called that a great tool for designers working with wood who could potentially get credit for their materials choice in their buildings since the EPDs are recognized through such green building programs as LEED.

Ultimately, Crabbe envisions the area as a vibrant mixed-use community where potentially people could grow up, and live there straight through the retirement.

“It’s really going to provide all of the necessary amenities within that area where you won’t have to travel far distances, and you can live being exposed to all different ages [of people] in a very sustainable form of development.”

Project developer Greg Fong praised the Reinventing Main Street plan for its use of a “form-based” code to direct development.  Fong’s family has owned the Garden View restaurant on Spring Garden Road the site of the new, suitably named Garden View building since 1945.

Fong called the form-based code a powerful alternative to traditional zoning and said the intentions of the community determine the physical form and character of the built environment.

For projects that meet the criteria of the plan under a form-based code, approvals can happen quickly. Garden View met the height, density and sustainability requirements and received site approval in less than three months.

The preliminary construction costs for Garden View are estimated at $120 per sq. ft. (including the underground car park), but the project team hopes to reduce those costs further yet.