The Joyce Centre for Partnership & Innovation in Hamilton has earned the first institutional and... 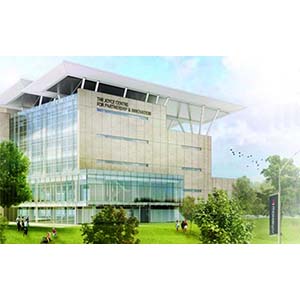 The JCPI will be home to new and existing programs offered through Mohawk’s School of Engineering Technology. It will be comprised of 96,670 square feet of innovative labs, workshops, lecture theatres, industry training centres all under one roof at Mohawk College’s Fennell Campus. It officially opens in September.

“We’re honoured to receive the Zero Carbon Building – Design certification. The Joyce Centre for Partnership & Innovation will not only be a showcase for green construction but also a living lab that will teach future generations how to build better, more sustainable buildings,” Mohawk College president Ron McKerlie said in a release.

The design features that contribute to the project achieving the ZCB-Design certification include:

* The Joyce Centre also features 28 geothermal wells that draw energy from more than 600 feet below the building. A variable refrigerant flow (VRF) geo-exchange heat pump system will provide both space heating and cooling.

* There will be no natural gas onsite.  An all-electric setup will facilitate low carbon usage for the building.

evolv1 is one of 16 projects across Canada, along with the Joyce Centre, to be selected by the CaGBC to participate in a two-year pilot of its new Zero Carbon Building Standard.

The Joyce Centre for Partnership & Innovation was built and led by a project team comprised of B+H Architects, mcCallumSather and EllisDon.

Hamilton-based McCallumSather is an architectural firm that has built a reputation throughout Canada as a sustainability leader and offers architectural, mechanical engineering, interior design, heritage consulting, LEED facilitation and project management services.

B+H Architects is a global, award-winning firm with a 60 years-plus legacy of building creative solutions for clients through the delivery of architecture, interior design, landscape, planning, advance strategy and other consulting services.

EllisDon Corporation was founded in London, Ont., in 1951 and has since grown to become a major international firm managing more than $3.5 billion in new construction annually.

Project teams participating in the two-year pilot of the CaGBC’s new Zero Carbon Building Standard are required to evaluate energy use holistically, including impacts on peak electricity, and to determine the GHG emissions associated with structural and envelope materials.

Mohawk College has more than 31,700 students

Mohawk College educates and serves more than 31,700 full-time, part-time and apprenticeship students at three campuses in Hamilton. Mohawk is among the leading colleges in Canada for applied research and is ranked No. 1 for student and graduate satisfaction among colleges in the Greater Toronto and Hamilton Area.

Mohawk has been named one of Canada’s Greenest Employers in each of the past five years in recognition of its leadership in environmental sustainability.

Ann White CEO and Publisher, RENX, Sustainable Biz Canada
Website: http://www.renx.ca Ann launched RENX in 2001 as a part-time venture and has grown the publication to become a primary source of online news for the Canadian real estate industry. Prior to RENX, she had a website hosting and development company that built more than 30 websites between 1997 and 2001. During the ’90s, she worked as a development coordinator in the co-operative housing sector in Toronto, guiding apartment building and townhouse developments from land acquisition through to occupancy.