When it comes to sustainable development, it was time to “walk the talk,” says Louis Lemay, presi... 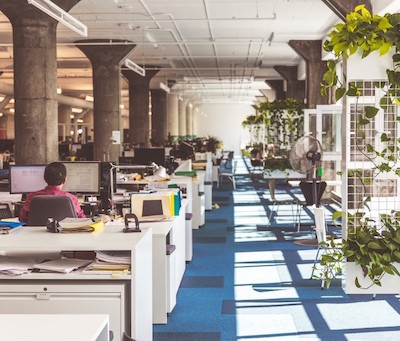 When it comes to sustainable development, it was time to “walk the talk,” says Louis Lemay, president of architectural firm Lemay.

That’s why the energy-efficient building in Montreal that houses his architectural firm can claim net-zero annual energy consumption and a host of innovations.

“It’s completely innovative,” says Lemay, of the former three-storey industrial building which has been converted into office space. “In our climate, it’s never been done.”

Among other things, the building consumes only 15 per cent of what a conventional building of its size would use. The energy that is consumed is produced by photovoltaic panels with heat recovery channels. The system makes the building completely independent in terms of energy, Lemay says.

Although the building at 3500 Saint Jacques Street is owned by Groupe Mach, Lemay was the major investor in the 18-month project that cost $25 million. The federal government provided Lemay with $1 million toward the net-zero annual energy consumption project.

History of the building

Built in 1950, the building originally served as the distribution centre for the Simpsons department store catalogue. It was later used by a documents storage firm.

Lemay moved into the building to centralize its 350 employees in Montreal, who were scattered throughout the city. The firm reflected on “the type of building we wanted for the future that could serve as an example,” Lemay says.

“We said we would go as far as possible – so no closed dedicated offices, new trends in collaborative work spaces and a net-zero energy building. “

The building has been named Phénix (meaning phoenix) and Lemay commissioned Vancouver-based artist Taka Sudo to paint an outdoor mural of a phoenix.

It’s based on the idea that the phoenix rises from the ashes and is immortal. Last year was the firm’s 60th anniversary and “we said it’s a good analogy between the phoenix and 60 years of a building that’s in its third life,” Lemay says.

How Lemay made it net zero

A state-of-the-art LED lighting consumes almost no energy. Motion detectors turn lights on or off and lights won’t turn on if there is enough natural lighting.

In the summer, when temperatures are between 15 and 22C, the triple-glazed windows open to provide natural ventilation. At temperatures above 22C, air conditioning systems kick in.

Rainwater is reused for equipment or for irrigation and a filter will be installed for brown water so the building can be completely independent from the municipal system.

The aim “is to show that a building can be independent in terms of waste water” and to reduce pressure on municipal infrastructure. “If everyone was a bit more efficient, we would have smaller infrastructures, smaller water filtration plants and lower costs.”

The firm was co-founded by Lemay’s father in 1957 and is known for such projects as 1000 de la Gauchetière and the Bell Centre.

Its current major projects in Montreal include designing all the stations for the new REM light-rail transit line and the $1.7 billion expansion of Trudeau International Airport.

Each REM station will depict the characteristics of surrounding neighbourhoods and incorporate as much wood and natural window lighting as possible. The airport, which has seen 32 per cent passenger growth in the last five years, will get a new arrivals terminal, new parking structure and an urban forest.

Lemay is also the architectural firm behind Humaniti, a $200 million hotel-office-condo-rental-commercial complex now under construction in downtown Montreal,  and Place des Montréalaises,  a new public square that will cover part of the Ville Marie expressway near city hall and will honour women who have marked the city’s history.

Reaching outside its Quebec roots

In addition to its Montreal office, Lemay has had an office in Quebec City for 20 years. During the past three years, it has opened offices in New York City, Toronto, Calgary and Edmonton. “We want to be able to represent clients from coast-to-coast,” Lemay says.

Among its projects outside Montreal are a number of hotels and residential buildings in New York and redevelopment of the former Woodbine Racetrack in Toronto into Woodbine District, a mixed-use project that will encompass new trends in sustainable development.

Phénix shows that it is possible to design net zero real estate projects in Canada that do not break the bank, Lemay notes. Because of the building’s reduced energy needs, pumps and other mechanical components are smaller and therefore less costly than would normally be the case.

The building’s systems were “road tested” through a winter and summer to ensure they worked properly and Lemay is now starting to offer net-zero positive building projects to clients.