New buildings in Canada will become more energy-efficient with the introduction of some 90 change...

New buildings in Canada will become more energy-efficient with the introduction of some 90 changes to the National Energy Code of Canada for Buildings 2015 (NECB). 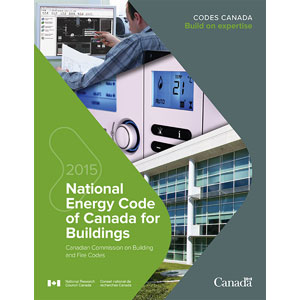 “The nationally developed energy codes are a great opportunity to move forward together on an issue that seems equally important to provinces and territories and the federal government,” said Frank Lohmann, a National Research Council (NRC) technical advisor who serves as codes development system lead.

The 335-page NECB includes information pertinent to building designers, energy consultants, subcontractors, construction professionals and regulatory officials. It’s published by the NRC and was developed by the Canadian Commission of Building and Fire Codes in collaboration with Natural Resources Canada.

The changes to the NECB update the last version published in 2011 and cover such things as: lighting; service water; efficiency regulation of heat rejection equipment; ventilation systems in enclosed spaces such as parking garages and warehouses; heating performance requirements for gas-fired outdoor packaged units; and minimum pipe and duct insulation requirements.

New buildings constructed to the updated code will be 27 per cent more energy-efficient than those built in 1997, according to the NRC.

“The NECB sets requirements for the energy-efficiency of buildings independent of the energy source,” said Lohmann. “The projections are calculations and may not represent the actual energy use once the buildings are occupied since occupant behaviour has a strong impact on actual energy usage.”

The changes to the NECB build on Canada’s commitment to work closely with the provinces and territories on the Canadian Energy Strategy, which protects the country’s energy security and encourages energy conservation.

Lohmann said the new NECB requirements are comparable with ASHRAE Standard 90.1, the document used in the United States for constructing energy-efficient buildings in many jurisdictions. They’re also on par with international energy codes, including those in Europe, that address cold climates.

The NECB was developed in a collaborative process with balanced input from construction industry members, regulators and general interest stakeholders.

“The input from expert committee members and stakeholders makes sure the acceptable solutions in the NECB are safe, healthy and constructible while achieving an acceptable level of energy-efficiency,” said Lohmann.

Under Section 92 of the Constitution Act, provinces and territories have the responsibility to regulate the design and construction of new houses and buildings in their jurisdiction. They’re free to adopt the NECB or adapt it to create a code that meets their specific needs.