After a three-year renovation, an aging mall in Ontario has re-emerged as a sustainable showcase. 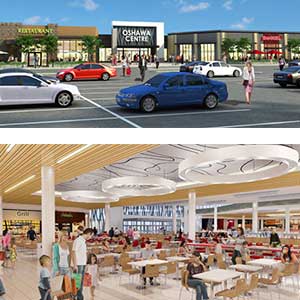 Originally built in 1956, Oshawa Centre reopened at the end of September with LEED Canada Core and Shell certification.

The LEED certification is a green building system that covers such elements in a building as the structure, envelope and things like central HVAC. It takes into account buildings where responsibility for certain parts of the building may be divided between the owner and the tenants.

“It translates to a healthier work environment for tenants,” said Chris Keillor, general manager for Oshawa Centre. “We have better air quality. We have more day light. We’ve reduced waste at the centre. We’re conserving more energy and decreasing our water consumption on site.”

Numerous changes that add up

The Ivanhoe Cambridge-owned mall added LED lights and low flow water fixtures throughout the building. The addition includes a white roof that provides energy savings of anywhere from 20 to 40 per cent during the summer months, Keillor estimates.

White roofs are painted with solar reflective coating and can reflect up to 90 per cent of sunlight. During summer, they help cut down on the use of air conditioning, cooling the building naturally instead and also offsetting carbon emissions as a result.

The mall added to electric vehicle charging stations and Keillor said more may be on the way.

A 153-metre living wall of plants also serves to act as a screen to the parking area. “It essentially shows Ivanhoe Cambridge’s commitment to sustainability,” Keillor said.

“It’s important to encourage these type of sustainability features. We’re a big energy consumer and we’re a big footprint. It’s really our commitment to the communities we operate in and that we do business in. It shows we’re a leader, trying to do our part for sustainability.”

David Baffa, the senior vice president of retail development with Ivanhoe Cambridge said the expansion offers an environmentally responsible design. He noted that it will also bring approximately 1,000 new full-time and part-time jobs to the region.

Being green isn’t new to the mall. Oshawa Centre was one of the the first malls to be recognized for excellence in environmental management and performance, achieving BOMA BEST Level 4 certification.

About the Oshawa Centre

The Oshawa Centre is the largest super-regional shopping centre in the eastern portion of the Greater Toronto Area. It features over 250 retailers.

The mall consistently is among Canada’s top sales performers and attracts over nine million shoppers annually, according to Ivanhoe Cambridge.

The retrofitting of older buildings in Canada is currently a hot topic. In early October, the Canada Green Building Council released a report that strongly urges building owners to retrofit their properties in order to help with the reduction of greenhouse gas emissions and enable Canada to meet its 2030 climate change goal.

As a property owner, Ivanhoe Cambridge has a number of sustainability programs in place.

One important initiative is the monitoring of its greenhouse gas emissions in its property portfolio. This allows the company to develop a carbon strategy related to the operations of its managed properties and work toward tangible reduction goals.

Using metres to determine how much energy its properties are consuming, Ivanhoe Cambridge managed to decrease its overall electricity consumption across its shopping centre portfolio by 2.2 per cent in 2015.

As well, the firm works to gain certifications for its buildings. Currently, 39 per cent of Ivanhoe Cambridge’s office buildings are LEED-certified, while 74 per cent of its Canadian properties are BOMA BEST-certified.

Ivanhoe Cambridge was founded in Quebec in 1953 and now holds interests in close to 500 properties, primarily in office, retail, residential and logistics real estate. The firm held more than $55-billion in assets as of June 30, 2012.

The company is a real estate subsidiary of the Caisse de depot et placement du Quebec, one of Canada’s leading institutional fund managers.