Participation doubles in Building Benchmark BC in 2021 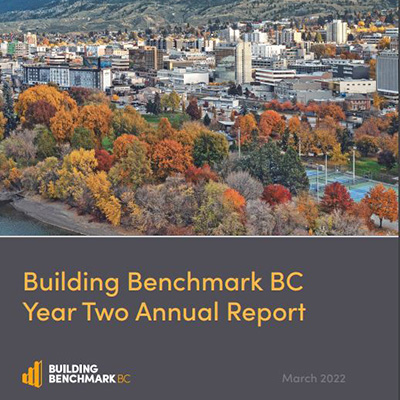 The cover of the Building Benchmark B.C. report. (Screenshot via the OPEN Green Building Society)

Participation in Building Benchmark B.C., a voluntary energy usage benchmarking and disclosure program for large buildings, doubled in 2021 and extended its reach to include more jurisdictions.

The second annual Building Benchmark B.C. report was recently released, summarizing the database of large buildings taking part in the program and their carbon and energy output. This year, it more than doubled the participation of buildings to 1,163 from 551 in the first report, making for more than 8.5 million gross square metres of floor space, an increase of 70 per cent.

The number of participating jurisdictions in the province also grew to 16 from 11 last year, adding the District of North Vancouver, Kamloops, B.C., Abbotsford, B.C. and the Capital Regional District. Altogether, the jurisdictions represent about 75 per cent of the large buildings in the province.

The report originated with and is run by privately owned software company OPEN Technologies in B.C., which grew out of the OPEN Green Building Society. This non-profit organization has been developing open-source software tools for the green building space since 2013.

Progress in the report

“This is still in a demonstration that we’re hoping is charting a pathway towards more rigorous and consistent performance tracking, to inform policy and regulation,” said Donovan Woollard, the managing director of the OPEN Green Building Society. “Also to inform where capital should go to create the biggest climate bang for your buck.”

A new addition to the 2022 edition was an expansion of the year-over-year scorecard for buildings. Woollard says that for newcomers like the residential property managers Kelson Group, “it’s a first time getting a view of their building relative to the neighbours, but their whole building, rather than just the meters they control in the common area.”

Now, building owners can look at a percentile ranking based on property type for various performance metrics, month-to-month performance (weather normalized, when possible) compared with other buildings, end-use breakdown of energy and greenhouse gas intensity and suggestions on how to improve performance.

Because the reporting is voluntary, some scorecards did have knowledge gaps or suspect data. According to Woollard, there was plenty of back and forth between OPEN and many building owners to validate much of the data. In some cases, OPEN discovered that many buildings’ energy reports look like they do because they were temporarily shut down due to the pandemic.

Beyond expanding into more of the province for year three, Woollard hopes to provide more aggregated data for cities. His example is providing the percentage of buildings most suited for green retrofits or different conservation measures. He also hopes to give the hard numbers on the jobs these retrofits would create.

“Making these (future numbers) for conversions not a hypothetical is the first step,” Woollard said. “If a typical envelope job on a multi-unit residential building is $100,000 and 30 per cent of the total building stock has to do that (job) to get to the (green) compliance levels for 2030, then how much economic activity is that?”

Data benchmarking in the province

He’s also hopeful that this data collection for large buildings will pave the way for other structures to begin their net-zero or GHG reduction goals, comparing data collecting to “colouring with crayons to etching with a laser.”

One of the functions of the report is for buildings, companies and districts to get ahead of incoming green regulations since these regulations are coming “whether the buildings choose it or not,” Woollard says.

In 2023, the City of Vancouver will require owners of commercial and multifamily buildings larger than 5,000 square metres to benchmark and report their properties’ energy and emissions performance.

At the provincial level, B.C. will require greenhouse gases across the economy to drop 16 per cent below 2007 levels starting in 2025. It will also review its buildings and communities target and consider narrowing its percentage range. In 2024, release a “retrofit” building code that will require increased building performance at alterations.

With each year, the plan will be “making the data collection better, making richer data sets and starting to inform how we’re going to do this at scale, on our way to 2030 and 2050,” Woollard said.

Aside from the participating jurisdictions, the report is supported by Natural Resources Canada, B.C. Hydro, the Real Estate Foundation of B.C. and the CleanBC Building Innovation Fund.

Registrations for the third report in 2023 will close on May 31st. From there, the deadline for building data collection is July 31st.

Nicholas Sokic ESG CSR International Mar. 10 2022
Nicholas Sokic Business reporter
Nicholas Sokic is a freelance, Toronto-based journalist. He has covered a number of sectors, including business, finance, crypto, health, cannabis and culture. He graduated from Western University's Master of Media in Journalism and Communications program in 2019.