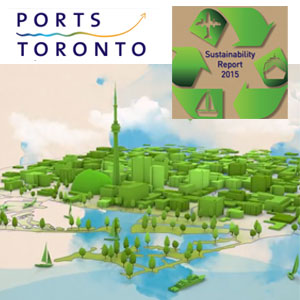 “We wanted to take a thorough look at the areas we were doing well, but also catalogue the areas where there is still room for improvement so that next steps can be determined and plans can be developed,” said PortsToronto chief executive officer Geoffrey Wilson.

“This first sustainability report serves as an important platform from which we can build and continually improve upon our organization’s sustainable practices, initiatives and investments.”

PortsToronto (formerly the Toronto Port Authority) works with its federal, provincial and municipal partners in order to enhance the economic growth of the City of Toronto and the Greater Toronto Area.

It owns and operates: Billy Bishop Toronto City Airport, which welcomes more than two million passengers each year as Canada’s ninth-busiest airport; the Outer Harbour Marina, one of Canada’s largest freshwater marinas with more than 600 slips; and Terminals 51 and 52, which provide transportation, distribution, storage and container services to businesses at the Port of Toronto.

“Sustainable organizations are successful organizations,” Wilson said of PortsToronto working with The Delphi Group, a pioneer in sustainability and environmental risk management with more than 25 years of experience, to compile its first report after years of enacting sustainable operational policies.

The report is in keeping with the Global Reporting Initiative, which has developed a comprehensive reporting framework used by more than 7,000 organizations in 60 countries to measure sustainability performance and is considered a best practice in public disclosure.

“I believe it is only through looking at our operations through a lens of community and environmental sustainability — and reporting on areas such as noise management, greenhouse gas emissions, waste management, power usage and safety — we can ensure that we are investing in the long-term future of our organization while conducting our business with respect for the community and the environment,” said Wilson.

Some of PortsToronto’s major sustainability initiatives have included:

* powering 100 per cent of its port, airport, marina and real estate operations with renewable energy from Bullfrog Power;
* the annual dredging and removal of approximately 68,000 tonnes of material from the Keating Channel and Toronto Harbour to prevent flooding of the Don River and keep the harbour clean;
* creating new natural habitats to increase biodiversity, such as the development of a nine-hectare wetland habitat for fish, birds and wildlife at Tommy Thompson Park on the Leslie Street Spit;
* expanding recycling efforts for solid and hazardous materials;
* making all reports and publications available online to reduce the need for print copies;
* banning plastic water bottles in all offices;
* utilizing hybrid vehicles for maintenance operations;
* and the investment of more than $8 million in community and environmental initiatives since 2009, supporting such organizations as Evergreen Brickworks, Lake Ontario Waterkeeper, Harbourfront Community Centre and Ireland Park Foundation.

“Key areas of focus for PortsToronto in 2016 will include waste reduction, continued efforts to keep the waterfront safe and clean for all to enjoy, and continued investment in Toronto’s waterfront community,” said Wilson. “Our progress on each next step will be reported on in the 2016 sustainability report.”

Shipping through the Port of Toronto helps reduce traffic congestion on highways and is a more energy-efficient way to transport goods. One tonne of freight can travel 240 kilometres on a single litre of fuel by ship, whereas it can travel only 30 kilometres on the same amount of fuel by truck.

The port experienced an eight-year high for marine imports in 2014, with two million tonnes of bulk cargo such as salt, raw sugar and cement being delivered. This would have required 50,000 40-tonne trucks if road transportation had been used instead.

PortsToronto annually provides more than $500,000 in donations, sponsorships and in-kind contributions to local initiatives, activities and events with the goal of promoting healthier, greener and empowered communities. It funded 27 community initiatives and organizations in 2015.

As part of PortsToronto’s ongoing efforts to reach out to residents and businesses surrounding Billy Bishop Toronto City Airport, it established a community liaison committee in 2011 to provide neighbours with a forum for discussing issues and concerns related to airport operations.

The committee meets four times a year and is composed of key members of neighbourhood community groups and stakeholders, including local city councillors, to explore matters ranging from managing airport noise to improving transportation access.

“Billy Bishop Toronto City Airport is an exceptional infrastructure asset for the City of Toronto, providing both access and economic gain for the city,” said Wilson. “It is also beloved by travelers, and our goal over the next five years will be to make investments in both infrastructure and services that heighten the passenger experience.

“Building upon our sustainability program to make sure our airport continues to operate in an environmentally sustainable manner wherever possible will be a key part of this five-year plan.”