Sifton Properties has been responsible for a number of construction firsts in its base of London,... 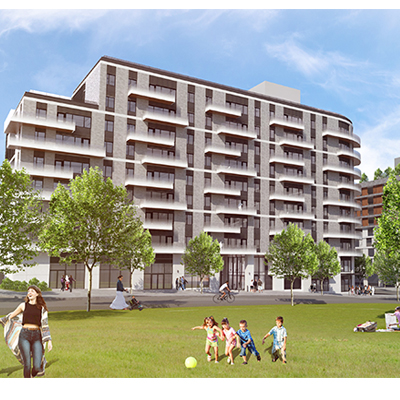 Sifton Properties has been responsible for a number of construction firsts in its base of London, Ont. since it built its first house in 1923. With West 5, it’s going to new heights and creating what it claims to be the most sustainable and energy-efficient community in Ontario.

“Making a positive and lasting impact on our community, while bringing forward the best product, is something that we strive to do at Sifton,” said president Richard Sifton.

“We are always looking for better ways to do that, and energy-efficiency and sustainability are important to us too in order to achieve those goals. We want to build our product the right way, with our customer and the environment in mind.”

West 5 will have 450,000 square feet of commercial space, a central park and 2,000 households consisting of townhomes, condominiums, apartments and retirement residences when it’s completed in 15 to 20 years along London’s Oxford Street West.

“West 5 is a lifestyle destination built with the future in mind,” said Sifton. “West 5 will be energy-efficient and will target net zero.

“It will encompass very modern architecture and state-of-the-art technology, but that is only one piece of West 5. West 5 will be a vibrant, walkable community where residents can live, work and play.”

West 5’s 60,000-square-foot Sifton Centre, which includes office and retail space, is the first net-zero office building in Canada. That means it generates as much energy as it uses in a year.

This was achieved through: 524 solar panels on the roof and integrated into the exterior façade; View dynamic glass; a variable refrigerant heating and cooling system that’s 55 per cent more efficient than conventional commercial systems; a rainwater cistern used to harvest water to flush toilets; LED lighting throughout; Energy Star-rated appliances; and two hives housing 100,000 honey bees.

Sifton has located its head office in the building, and all of its staff members are using laptop computers instead of desktops to save power and give people the flexibility to work in different areas.

The Sifton Centre is open. All of the office space and 40.5 per cent of the ground floor retail and commercial space is leased.

Construction is expected to finish on 1305 Riverbend — a four-storey, building with 30,640 square feet of office space and 5,937 square feet of retail and commercial space — late this spring. No leases have been signed to date.

The building is expected to achieve net-zero status. It will be fitted with 820 400-watt solar panels on the roof and exterior walls that will allow it to generate 384,000 kilowatt hours of electricity in a year. That’s enough to power 32 average Canadian homes.

A large, energy-efficient digital display on the corner of 1305 Riverbend, overlooking the park, will broadcast community programs, events and news from West 5 retailers.

Construction is underway on Helio, a $57-million, 10-storey, 115-unit apartment with resident amenity spaces, 17,370 square feet of ground floor retail and commercial space, and a 321-stall parking garage. It will be 77 per cent more energy-efficient than similar-sized residential buildings constructed under the Ontario Building Code and is expected to be the most energy-efficient multi-use residential high-rise in Ontario. It’s targeting occupancy for late next year.

Natural Resources Canada‘s Energy Innovation Program is contributing $3.9 million to Helio, enabling it to add more solar panels and upgrade some mechanical equipment. This will make the building almost 25 per cent more efficient than originally planned.

Several rental townhomes, with seven suite styles and sizes ranging from two bedrooms to three bedrooms and a den, are already occupied. There will be 87 in total once they’re completed in the fall, with rents ranging from $1,549 to $2,299.

West 5’s first residential condo, a mid-rise building with ground floor retail and commercial space, is in the design stage. While it will target 100 per cent energy-efficiency, no floor plans, unit sizes or prices have been determined. Sifton is looking to 2022 for completion.

West 5’s independent living apartments and retirement residence are also in the design stage, and floor plans and pricing haven’t been confirmed. It’s hoped that it can achieve net-zero energy usage.

“This project will be a two-step build, meaning we build the independent apartment building first and the retirement residence second,” said Sifton.