The City of Ottawa is making money off of sunlight thanks to an innovative rooftop solar project the city has put in place along with Energy Ottawa. 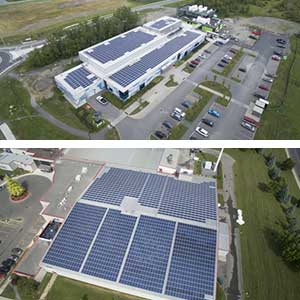 Energy Ottawa, a subsidiary of Hydro Ottawa, has leased eight rooftops from the city on which to install large solar installations. The roofs are mostly on sports complexes and garages.

Energy Ottawa has negotiated a fixed rate lease over 20 years based on the square feet occupied by the the solar projects. The lease coincides with a contract between the agency and an independent electricity supplier in Ontario for a term of 20 years that allows Energy Ottawa to sell the power back into the grid.

“For the city, that’s found revenue for roof space that wasn’t otherwise being used.”

The city expects to receive approximately $85,000 annually or $1.7 million over the course of the 20-year contract.

For Energy Ottawa, the solar generation provides additional revenue that then goes back in the form of a dividend to its shareholder, which is the City of Ottawa.

Over the 20-year term, the rooftop solar is expected to cut greenhouse gas emissions by 41,382 metric tonnes.

At the same time the systems are expected to generate nearly three million kilowatt hours annually, which is equivalent to removing more than 300 Ottawa homes from the grid every year.

Clarke said Energy Ottawa would like to do more projects, but noted that in Ontario long-term contracts for renewable programs are coming to an end.

In late September the provincial government announced that it was suspending its second round of “Large Renewable Procurement” and “Energy-from-Waste Standard Offer” programs, halting procurement of over 1,0000 megawatts of solar, wind, hydroelectric, bioenergy and energy from waste projects.

The province said halting the program would save $3.8 billion in electricity systems costs under the province’s 2013 long-term energy plan forecast, an estimated savings to the typical residential consumer of approximately $2.45 per month on their electricity bill.

Ontario has about 18,000 MW of wind, solar, bioenergy and hydroelectric energy contracted or online and the electricity supply is now over 90 per cent emissions-free.

Clarke said the next opportunity for Energy Ottawa might be in net metering, where small-scale solar installations provide power directly back to the commercial or residential users.

“The net metering opportunity, I think is where we’re going to see the next big growth in projects,” Clarke said.

The case for net metering

Currently the energy agency is looking at the business case for net metering.  It is making projections based on where electricity prices and the costs of solar are going to go in the next couple of years.

Clarke said the business case looks “quite compelling” when Energy Ottawa starts looking at the role it might play. That could take the form of the agency designing, building and installing solar arrays. Or it could mean Energy Ottawa might finance the cost of construction and the consumer would then pay for the system installation over a period of time.

Energy Ottawa is the largest municipally owned producer of green power in Ontario. The company generates 79 megawatts of clean electricity annually, which is enough to power 62,000 homes.