Real estate investment firm One Properties has announced its Southpark on Whyte in Edmonton has b... 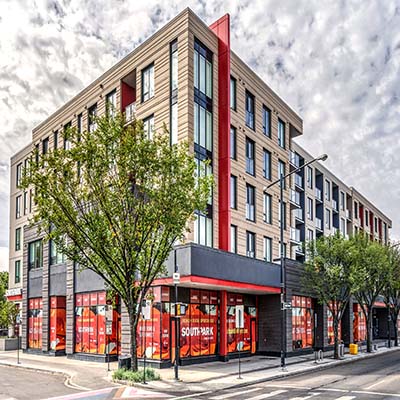 The exterior of Southpark on Whyte. (Courtesy ONE Properties)

Real estate investment firm One Properties has announced its Southpark on Whyte in Edmonton has become the city’s first LEED Gold-certified multifamily development.

Located in the Old Strathcona neighbourhood, the project was developed in partnership with Edmonton-based Wheaton Properties. The 99 rental suites in phase one of the project opened to residents late in 2020.

At full build-out, the project will comprise 660 suites and 26,900 square feet of retail space.

The property is being redeveloped from its former use as a car dealership, so ONE Properties’ director of sustainability Graham Halsall said there was some site contamination to deal with.

“It wasn’t just a straight-up greenfield development, there was contamination issues to deal with in a highly populated, dense urban location. So that stayed (with us) during the original discussions around what could be done,” said Halsall. “The lessons learned from this particular project, (the) integrated design process was pretty critical to getting common objectives, sustainability priorities, schedules all aligned with team members.”

Halsall said qualities both tangible and intangible helped earn Southpark its LEED certification. The former refers to the visible or quantifiable materials and equipment installed during construction. Public-facing amenities like EV chargers or the property’s moss wall would be examples.

The latter, he said, refers to sustainability measures which can’t be seen with the naked eye – or by a casual observer. The building’s energy performance fits into this category.

He also mentioned the ‘homework’ which went into getting lower-flow toilet models to save money on water, a feature most if not all residents would barely notice.

“This building was designed and started construction before COVID was a household word. But this has become a workplace environment now, and so a lot of the criteria which went into the design and construction of this building has risen to the top of the priority list,” Halsall said. “The ability for residents to control temperature and humidity within their space, that has become more paramount just by the sheer number of hours that folks are spending in their homes as work-from-home orders roll out.”

Some of the other measures taken by ONE to ensure LEED certification include:

– locally sourced construction materials, including 100 per cent of concrete aggregate from the immediate area;

– a strategic waste diversion strategy which reduced the amount of construction material sent to landfill by over 40 per cent compared to a typical project;

– and exclusive use of no- and low-volatile organic compound (VOC) interior paints, coatings, flooring and insulation to prevent off-gassing and support healthy indoor air quality.

According to Halsall, ONE has pursued either LEED or BOMA Best certifications on about 85 per cent of its portfolio.

ONE Properties is a privately owned, integrated real estate investment firm that has developed and managed a range of high-quality assets — multi-family residential, retail, office, industrial and mixed-use – since 1987.

As a division of the Wheaton Group, founded in 1955 by Don Wheaton Sr., Wheaton Properties owns a portfolio of over 400,000 combined square feet in retail, office, and mixed-use assets across Victoria, Nanaimo, Edmonton, Regina, Saskatoon and Grande Prairie.