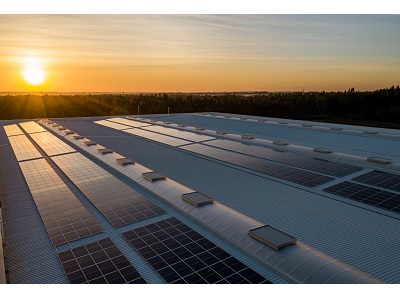 Springbank Energy hopes to bring an energy-as-a-service model to the real estate industry, with one major component being warehouses equipped with solar panels. (Courtesy Springbank Energy)

Founded in June and headquartered in Toronto, Springbank is led by founder and CEO Ben Gilbank. After a 13-year career in real estate, including five years as the director of development at QuadReal Property Group, he made the leap in May to the renewable energy field.

Having learned about the energy side of real estate, he grew passionate about making sure that renewable energy systems are included: “I personally really felt that sustainability and real estate should go together,” he told SustainableBiz in an interview.

Saying the renewables industry is in its “early infancy” of adoption by Canada’s real estate industry, Gilbank said Springbank’s mission is to, “help the Canadian real estate industry to make that transition by providing a combination of financial analysis, engineering, construction and support”.

He aims to make Springbank the first renewables firm in Canada with a strong real estate background, to serve as a bridge between the two industries. Gilbank saw a void from the renewables industry which sells its solutions to real estate, but lacks the knowledge of a “complicated, integrated” real estate world that covers business, engineering, design, politics and communities.

Gilbank believes Springbank differentiates itself because it is tech-agnostic. It can juggle between three renewables technologies, which he claims is something no other company in Canada offers.

Springbank acquires its renewable technology from open sources. Gilbank likens it to building a house, where the general idea for a house is already well-documented.

From there, the company hires engineers to develop the technology and then contractors to design and operate it long-term. Out of the technology it currently offers, he said the most promising space is in multiresidential buildings for carbon-free space heating and cooling using geothermal energy. He said geothermal is the best option right now, though solar energy is finally becoming viable.

Having identified space heating and cooling systems powered by natural gas as one of the biggest contributors to building greenhouse gases, Springbank’s main focus is to replace gas-fired equipment with renewable technology.

The geothermal system taps into natural heat emitted 650 to 850 feet underground with pipes filled with fluid that turn the ground beneath buildings into a thermal battery for heating or cooling. Heat pumps in each suite circulate the fluid through the building via a pipe network.

Gilbank said rooftop solar photovoltaic has ample use for warehouses, which is a sector of the industrial real estate industry he deems “extremely hot” due to the boom in e-commerce and related logistics. He expects solar energy to be applied in warehouses that range from 250,000 to over a million square feet.

As these buildings have a “giant square box of a roof,” Gilbank said the open space can be occupied with solar panels to power the building sustainably.

For retrofits, Springbank will replace gas-powered boilers with electric substitutes and add solar panels to buildings. Springbank would consult with the building owner on what changes to make changes, and offer to finance the project.

The company’s financing model is what it calls an ‘energy-as-a-service’ or utility model. A third-party group like Springbank goes to a real estate owner and will offer to purchase a renewable project in exchange for ownership of the pieces and charging a rate for electricity or thermal energy.

Springbank, meanwhile, also raises money from investors and deploys it into the renewable energy systems as a conduit between investors and the project itself.

“We chose it because it works both for the real estate client and those objectives they have, and it works for our objectives of being an energy-as-a-service provider and as an investor in renewable energy,” Gilbank said.

The property owner thus avoids having to spend, potentially, millions of dollars for the clean energy system. The energy price Springbank offers in rooftop solar is virtually identical to the price from the grid, the company says, and it helps property owners meet net-zero emissions goals, which is also a marketing asset.

It is currently focused on the Greater Toronto Area, but Gilbank says there is interest from companies outside the region.

Avenue Living gets CIB funds for $150M in building retrofits

Tyler Choi Energy Solar Energy Atlantic Canada Sep. 12 2022
Tyler Choi Business editor, Sustainable Biz Canada
Tyler Choi is a journalist based in the Toronto area. He has covered a wide range of sectors ranging from science and technology, the environment, business, government policy and crime, to finance. Among the many people he has interviewed, his favourite was an Ig Nobel Prize winner.